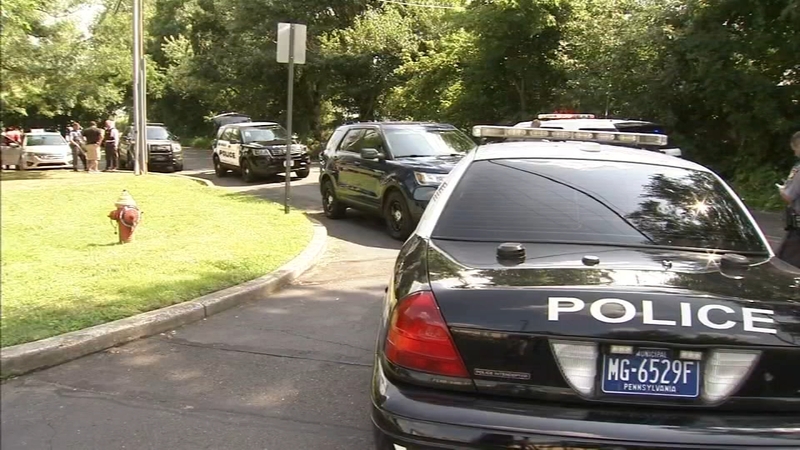 BENSALEM, Pa. (WPVI) -- An all points alert for the second suspect is still underway. The guy could anywhere, but they are confident they will catch up with him eventually.

Meanwhile, the other one who investigators say pointed the gun at the trooper is in custody, but not before a very tense situation out here.

Police have identified the suspect in custody as 23-year-old Anthony H. Bupp of Philadelphia.

Bucks County District Attorney Matt Weintraub said, "This really could have been a disaster."

Weintraub described what went on Friday in the 3600 block of Street Road in front of a busy Wawa and next to a KinderCare Learning Center.

Witness James Cella said, "I heard a lot of commotion and somebody running through here, and one cop car after another rolling in."

Officials say this all began about 1:26 p.m. Friday when Trooper Mohamad Saloukha initiated a traffic stop on a red and black Dodge Charger for vehicle code infraction.

Neither of the vehicle's occupants were in possession of drivers licenses or any forms of ID.

Trooper Saloukha asked the passenger, later identified as Bupp, to step outside of the vehicle. He was attempting to pat the passenger down for weapons when he made a run for it.

The officer then pulled his Taser and gave chase.

"The officers obviously are trained in how to use escalating force and you're supposed to use the least amount of force necessary to apprehend somebody," said Weintraub.

But then officials say the man turned around and pointed a gun at the trooper.
The officer then discarded the Taser and drew his own weapon at the man.

"And frankly probably could have been shot, but the officer kept his cool, continued to chase," added Weintraub.

Soon all sorts of reinforcements would arrive to track down the gunman.

The KinderCare where Shawanda Glover's 5-year-old son attends was placed on lockdown.

Glover said, "There was a lot of craziness between the helicopters, the officers, the dogs, officers throwing the dogs over the fence."

The suspect jumped over a fence and ran into a neighborhood.

"We set up a perimeter, once we knew that the suspect was embedded in the neighborhood. We just circled and circled, and tighten the noose and surrounded him until we caught him without additional incident," said Weintraub.

There was only one hitch while they were looking for the gunman, the driver of the car drove off.

And after they arrested the man who ran, they discovered he threw the weapon somewhere and the

last thing officers wanted was for a child to find it and get hurt.

Fortunately, they were able to find the gun.

"This was a potentially tragic situation where tragedy was averted by excellent police work," said Weintraub.

The car being sought had a temporary Florida tag with the number T20 7777.

If you see the vehicle or have information on the driver, you are being asked to call State Police.