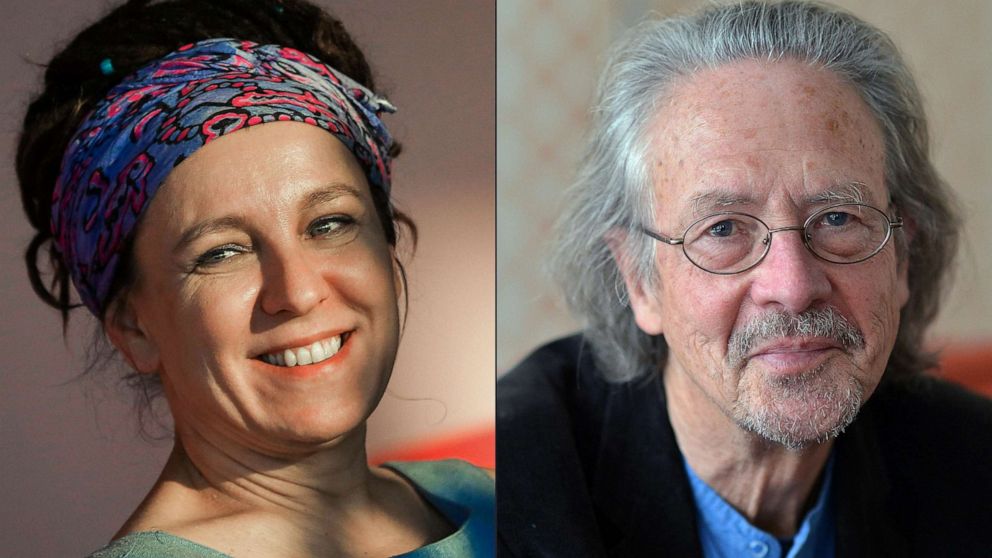 Tokarczuk, 57, won the 2018 Nobel Prize in Literature "for a narrative imagination that with encyclopedic passion represents the crossing of boundaries as a form of life," according to a press release from the Swedish Academy in Stockholm, which is responsible for choosing the Nobel laureates in literature. Tokarczuk is the 15th woman ever to win the award. Her best-known works include the novels "Flights" and "The Books of Jacob."

Handke, 76, won the 2019 Nobel Prize in Literature "for an influential work that with linguistic ingenuity has explored the periphery and the specificity of human experience," according to the Swedish Academy. His best-known works include the novel "The Goalie's Anxiety at the Penalty Kick" and a memoir about his late mother, "A Sorrow Beyond Dreams."

Along with the notoriety, Tokarczuk and Handke will each receive a cash award of 9 million Swedish krona, or about $915,000.

Two winners were announced this year because the 2018 Nobel Prize in Literature was postponed amid a sexual assault scandal that rocked the Swedish Academy.

Jean-Claude Arnault, who is married to a former member of the Swedish Academy board, was convicted last year of two rapes in Stockholm in 2011. He was sentenced to 2-and-a-half years in prison.

The charges prompted his wife, poet Katarina Frostenson, to leave the prestigious body.

The Swedish Academy cited the "reduced public confidence" in the centuries-old organization upon announcing the decision to shelve the 2018 Nobel Prize in Literature.

"We find it necessary to commit time to recovering public confidence in the academy before the next laureate can be announced," Anders Olsson, the Swedish Academy's acting permanent secretary, said in a May 2018 statement.

In November 2017, Swedish newspaper Dagens Nyheter published allegations by 18 women, including Swedish Academy board members, their wives and daughters, who said they had been raped, sexually assaulted or harassed by Arnault, a 73-year-old French photographer and prominent cultural figure in Sweden and beyond.

The Swedish Academy, which was founded in 1786 and prides itself on its top-secret selection process, became entangled in further controversy when the newspaper reported Arnault had allegedly leaked the names of the Nobel Prize in Literature winners seven times, including 2016 laureate Bob Dylan.