WPVI
EWING, N.J. (WPVI) -- Terry Sodomin, 99, was among those lining up Tuesday morning at the West Trenton firehouse in Ewing to vote.

"It's my duty. You're supposed to vote. It's just something you have to do," Sodomin told Action News.

No excuses! If this 99 yr old from NJ can make it to the polls so can you. She's an inspiration. #vote #ElectionDay pic.twitter.com/9zHYG29gTi

Poll workers say more people cast ballots by 10 a.m. than normally do in an entire day for other elections.

"People are very motivated. I don't know whether that's good for Democrats or Republicans, but it's good that people are participating," Mercer County Election Board Commissioner Peter Nichols said.

And they are - casting ballots for Donald Trump, Hillary Clinton, or third party candidates.

"I don't care for Hillary. I think she's a liar. I'm going with Donald," Antonio Gonzalez of Ewing, NJ said.

"I'm kind of sick and tired of the bickering back and forth," Erin Spina of Ewing, NJ said.

Spina feels the way almost every voter we spoke with does: she's tired of the TV ads and the negative tone of the presidential campaign.

"I'm glad it's finally here. I'm glad that we can finally get in and vote and hopefully a new change is coming our way," Spina said.

"It's been a difficult time for both candidates and I hope it all works out well. It's a beautiful day and I hope everybody votes," Lynn Lally of Ewing, N.J. said.

"Whether it's Donald Trump or Hillary Clinton, they've got a hard road to heal our country of the racial polarization that's happened," Reverend Darrell Armstrong of Ewing, N.J. said.

And if you feel like it's not worth going to the polls or you're too busy, think of 99-year-old Terry Sodomin, who's been voting since the 1930s and wouldn't miss the chance.

"Oh my gosh, it's our duty to do it. I think it's just important for everyone to do it," Sodomin said. 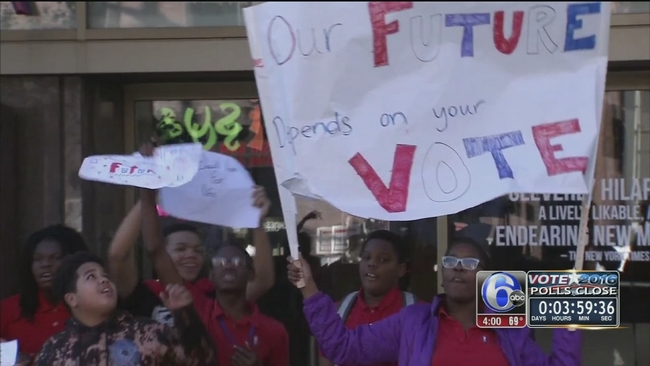