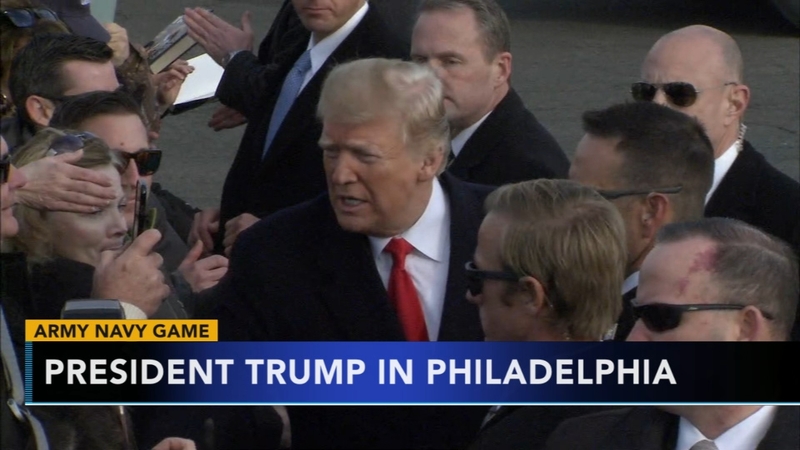 PHILADELPHIA -- It was the first Army-Navy football game for Donald Trump as president, and he officiated the coin toss in Philadelphia before the 119th meeting in the storied rivalry.

Army coach Jeff Monken hopped on top of a wall and pumped his fist toward stoked cadets set to belt out the alma mater. Monken brought the party to locker room and waved an "Army Football" flag as the Black Knights bounced around him.

Army ditched its mundane routines and cut loose like a bunch of rowdy civilians. And why not? The setting was right after Army beat Navy for the third straight game, this time in front of a packed house and the president.

"I don't ever want our guys to stop celebrating," Monken said. "I promise you, I'll be celebrating every year if we win this thing because I know how hard it is."

Monken resuscitated the Black Knights and turned a program that suffered annual losses to the Midshipmen into a bowl-bound team that can keep the Commander-in-Chief's Trophy back at West Point.

The No. 22 Black Knights recovered two fumbles in the fourth quarter, Kelvin Hopkins Jr. had two rushing touchdowns and Army beat Navy 17-10 on Saturday to win its third straight game in the series.

President Donald Trump attended the 119th game between the rivals and flipped the coin before spending a half on each side in a show of impartiality. No matter his view, Army (10-2) always had the edge.

With Navy down 10-7, quarterback Zach Abey lost a fumble on fourth-and-12 deep in its own territory. Hopkins would score on a 1-yard run to make it 17-7 and give Army the cushion it needed to win in front of 66,729 fans at Lincoln Financial Field.

Army hopped and waved hands in celebration during a replay timeout and got the cadets in the stands to bounce along. They had good reason to celebrate: Army has regained its grip in a series that had gotten out of hand. Navy had a series-best 14-game winning streak from 2002-2015 and leads the series leads 60-52-7.

"It's been hard on all of us. Our players, our coaches, our staff, our school," coach Ken Niumatalolo said. "We like to win. We've been winning a lot of games. Losing sucks."

Trump sat on the Army side in the first half and crossed the field to the Navy side at halftime. Trump officiated the coin toss and was introduced by public address announcer Dan Baker to a cheering crowd.

Navy won Trump's toss and elected to kick off.

That was a mistake.

Kell Walker ran 51 yards to the 10 on the fourth play from scrimmage and Hopkins dashed in for the TD on the next play for a 7-0 lead.

"I think anything I did was just within the game plan," said Hopkins, the game's MVP.

In a series steeped in tradition - the "March On" and drumline battles, among them - perhaps none is more ingrained than the running game. Last year's game had a combined three pass attempts and quarterbacks for each team are usually the leading rushers. But Army and Navy passed on the rush and tried to throw, with mixed results. Army safety Jaylon McClinton had an interception in the first half. Army also dropped a key third-down pass that led to John Abercrombie's missed 33-yard field goal in the second quarter.

Abercrombie rebounded to kick a 33-yarder in the third for a 10-0 lead.

Last season's game was an instant classic and was decided by a field goal: Bennett Moehring narrowly missed a 48-yarder in the snow on the final play and Army held off Navy 14-13.

Moehring made the extra point on Lewis' score and he kicked a 45-yard field goal with 29 seconds left. Malcom Perry's 43-yard run to the 5 set up Garret Lewis' 1-yard rushing TD with 7:10 left in the game that pulled Navy to 10-7.

There were reminders all around the Linc, home of the Super Bowl champion Eagles, that this was no ordinary game. The Navy "Leap Frogs" parachute team earned a roar from the crowd with each safe landing on the field. Bill the Goat, Navy's mascot, was safely leashed and secured from a possible abduction attempt from overzealous cadets. And each side safely returned "captives" in the Prisoner Exchange - when seven midshipmen and seven cadets swap service academies for a semester. The Army prisoners spelled out "3-PEAT on the back of their uniforms.

Navy: Had 0 yards passing and 64 yards rushing through three quarters. ... Lost a key fumble inside the 10 in the fourth when it was still 10-0.

Trump was the 10th sitting president to attend Army-Navy, a tradition that began with Theodore Roosevelt in 1901. Barack Obama was the most recent president to attend the game, in 2011 at FedEx Field in Landover, Maryland. Trump also went to the 2016 game when he was president-elect.

"It was my honor to attend today's #ArmyNavyGame in Philadelphia. A GREAT game played all around by our HEROES. Congratulations @ArmyWP_Football on the win!" Trump tweeted.
------
Send a News Tip to Action News
Learn More About 6abc Apps
Report a correction or typo
Related topics:
politicsdonald trumpphilly newsnavypresident donald trumparmy
Copyright © 2021 by The Associated Press. All Rights Reserved.
More Videos
From CNN Newsource affiliates
TOP STORIES