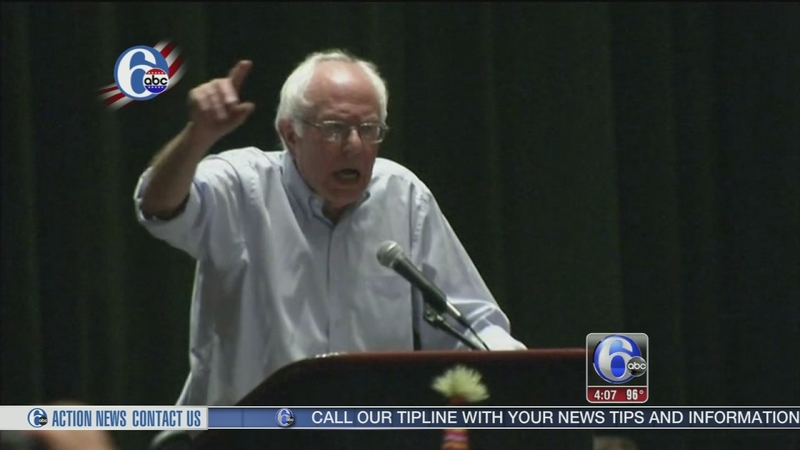 PHILADELPHIA (WPVI) -- Seeking to avoid a televised display of disunity, Bernie Sanders on Monday urged supporters to line up behind Democrat Hillary Clinton and claimed victory in deposing and sidelining a top party official.

Some of his supporters jeered in disapproval, indicating turmoil at this week's Democratic National Convention won't end with the departure of the party chairman, Rep. Debbie Wasserman Schultz of Florida.

Speaking to his convention delegates at the Pennsylvania Convention Center in Philadelphia, just hours before the Democrats opened a convention to nominate his primary rival, the Vermont senator tried to settle roiling tensions between his supporters and the party rank-and-file lining up behind Clinton.

A fresh email controversy, appearing to show bias by party officials against Sanders, has made that task harder just as the national spotlight turns to the Democrats' rally behind Clinton.

"Brothers and sisters, this is the real world that we live in," Sanders told his audience, raising his hand in an effort to quiet them. Republican nominee Donald Trump is "a bully and demagogue," he said, who must not win the White House.

Bernie Sanders was booed by the crowd when he asked them to support the Clinton/Kaine ticket.

The remarks were met with boos and grumbling from supporters clearly not ready to give up the fight for what he calls his "political revolution." Sanders tried to persuade them they had already won by helping to create what he called the "most progressive Democratic platform in the history of the party." And he, too, celebrated the ouster of Wasserman Schultz after the email hack.

"Her resignation opens up the possibility of new leaders at the top of the Democratic Party that will stand with working people," he said.

As they departed, some delegates agreed with Bernie's message, while others said 'No way.'"

"I think we should back Hillary. I think Hillary's the clear choice at this point, he's brought a lot of fine issues to light. Hillary's got to be the labor choice candidate. Trump is not that candidate," said Frank McCann of New York.

"We told Bernie we love him, we appreciate him, and we do not accept him telling us to vote for Hillary. He's doing it because he has to, and not because - clearly the movement doesn't want to, and we don't accept hit," said Kona Morris of Colorado.

As Sanders spoke, Wasserman Schultz announced she would not gavel in the convention, recognition that her presence onstage would only showcase Democrats' deep divisions. The Florida congresswoman was greeted with boos Monday morning by delegates who would certainly have repeated the spectacle.
Related topics:
politicsphiladelphia news2016 democratic national convention dnc
Copyright © 2021 WPVI-TV. All Rights Reserved.
More Videos
From CNN Newsource affiliates
TOP STORIES