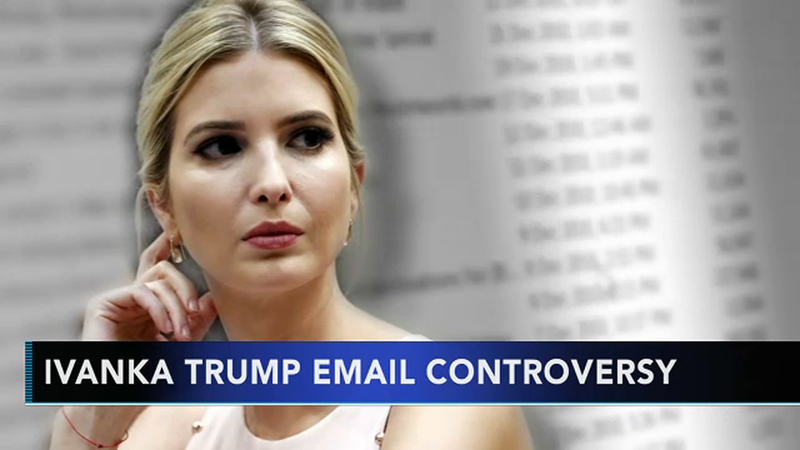 Congress to probe Ivanka Trump's private email use in WH

WASHINGTON -- New revelations about the extent of Ivanka Trump's personal email use in the White House will be getting a hard look from House Democrats when they take power in January.

The House Oversight and Government Reform committee began looking into private email use last year after reports by Politico revealed that Ivanka Trump's husband, Jared Kushner, and other White House officials had been using private email for government purposes in possible violation of the Presidential Records Act and other federal record-keeping laws.

Rep. Elijah Cummings of Maryland, the likely incoming chairman of the Oversight panel, said Tuesday that he will resume that bipartisan investigation, which was dropped by Republicans. And he will pressure President Donald Trump's administration to turn over records about the use of private email for public business by Ivanka Trump, Kushner and other senior officials.

"My goal is to prevent this from happening again - not to turn this into a spectacle the way Republicans went after Hillary Clinton," Cummings said. "My main priority as Chairman will be to focus on the issues that impact Americans in their everyday lives."

The issue resurfaced this week when The Washington Post reported that the president's daughter, while a top White House adviser, sent hundreds of emails about government business from a personal email account last year. The emails were sent to White House aides, Cabinet members and Ivanka Trump's assistants, many in violation of public records rules, according to The Post.

In comments to reporters, the president, who has spent years railing against Clinton's use of private email for public business while secretary of state, sought to downplay - and differentiate - his daughter's email use from his former opponent's.

A spokesman for Ivanka Trump's lawyer, Abbe Lowell, didn't dispute the Post report. The spokesman, Peter Mirijanian, said no classified information was transmitted in the messages, no emails were deleted and the emails have since been "retained" in conformity with records laws. He also said Ivanka Trump did not set up a private server for the account, which he said was "never transferred or housed at Trump Organization."

Mirijanian said that while transitioning into the government, Ivanka Trump "sometimes used her private account, almost always for logistics and scheduling concerning her family."

On Tuesday, Republican Rep. Mark Meadows of North Carolina, a fierce defender of the president as the leader of the House Freedom Caucus, also downplayed the matter.

"There are over 30,000 BleachBit reasons why the Hillary Clinton email scandal isn't even close to the Ivanka email issue," Meadows tweeted, referring to a computer program used to delete emails from her server.

The House Oversight investigation into private email used by Trump White House officials was launched in early 2017 with the support of then-Republican chairman Rep. Jason Chaffetz. After Chaffetz retired from Congress, Rep. Trey Gowdy of South Carolina joined with Cummings in demanding that the White House provide the identities of staff members who had used their personal emails to conduct official business.

In October 2017, the White House dispatched counsel's office lawyers Stefan Passantino, Uttam Dhillon and Daniel Epstein to brief bipartisan committee staff, but the attorneys refused to identify any officials who had used private email for official business. The lawyers only said that several White House employees had "confessed" to failing to following the Presidential Records Act, according to a letter summarizing the briefing released by Cummings earlier this year.

The White House lawyers said they couldn't provide additional information on specific employees while an internal review was under way, according to the letter.

But the White House lawyers said they would share the findings of the internal review with the committee once it concluded, according to a separate letter sent to the White House by Gowdy.

Cummings has said the committee never received that information, and Democrats have said Gowdy dropped the issue and never followed up.

The discovery of the extent of Ivanka Trump's email use was prompted by public records requests from the liberal watchdog group American Oversight. The group's executive director, Austin Evers, said in a statement that "The president's family is not above the law," and he called on Congress to investigate.

"For more than two years, President Trump and senior leaders in Congress have made it very clear that they view the use of personal email servers for government business to be a serious offense that demands investigation and even prosecution, and we expect the same standard will be applied in this case," he said.