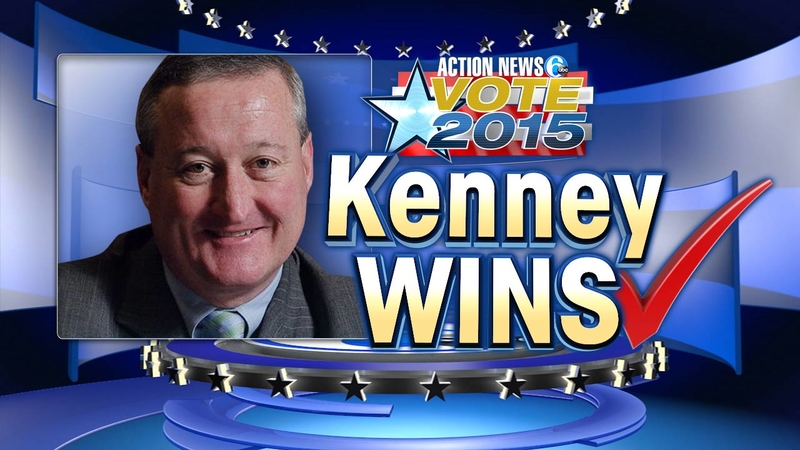 PHILADELPHIA (WPVI) -- Jim Kenney was the heavy favorite in a largely Democratic city so it comes as no surprise his election as the city's new mayor turned out to be a cakewalk.

Throughout his campaign, mayor-elect Kenney emphasized some of his priorities for the city: education, community policing and building the city's economy.

The at-large city councilman has long prided himself in building a consensus to getting things done, and he is hoping to continue that philosophy as the city's mayor.

After delivering his victory speech on Tuesday night, Kenney spoke with Action News about the type of administration he wants to build.

When asked what his top priority is, Kenney answered, "Poverty, it's no doubt about it, and everything hinges on it. Pre-K, jobs that pay living wages, people returning from prison - all those issues are tied up in our poverty problem.

"And, again, the largest poverty number in the country as far as big cities are concerned, and we should be embarrassed about that and work every day as best we can to fix it," he added.

"Thank you. There are a lot of people who deserve recognition for this victory - far too many to name - but I do want to take just a few seconds to thank my parents and my children. None of this would have been possible without your love and support. Throughout this campaign, I have been asked, time and time again, what I am going to do to move Philadelphia forward. Tonight, surrounded by all of you, I am reminded that it is not what I am going to do, it is what we are going to do. If we all learn to see the world through one another's eyes, then every Philadelphian will be able to walk our streets safely and with dignity. If we all pitch in, then Philadelphia's teachers will actually have the resources they need to teach; and our smallest, most vulnerable children will go to pre-k. And if we build an economy for all of Philadelphia, then we will not only grow our commercial corridors and provide a real path for returning citizens --- we will break the cycle of poverty for so many families. Some will say that these are lofty goals. Back in January, this victory also appeared to be a very big reach, but this campaign showed Philadelphia what can happen when people from all different walks of life work together. Behind this campaign we had environmentalists, feminists, teachers, working families, first responders, unions, public school parents, clergy, the LGBT community, immigrants, and so many more. Together, these groups did far more than just elect a new mayor, they proved that every neighborhood matters. Standing in a place that celebrates the aspirations of Jewish families seeking the American Dream, I am reminded of the neighborhood in which I grew up. In those days, South Philly was a mix of immigrant families from all different backgrounds and faiths - Irish, Polish, Catholic, and Jewish. But despite their differences, they all worked together to create a better place for their families to live -- whether that meant watching after one another's kids or making sure that the elderly neighbors pavements got shoveled. As I've said tonight, I want a lot of things for our children, but, most of all, I want them to grow up in a Philadelphia where we all look past our differences and join together to create a better place for all of us to live. A place where we not only agree that all neighborhoods matters, but where we act on it."