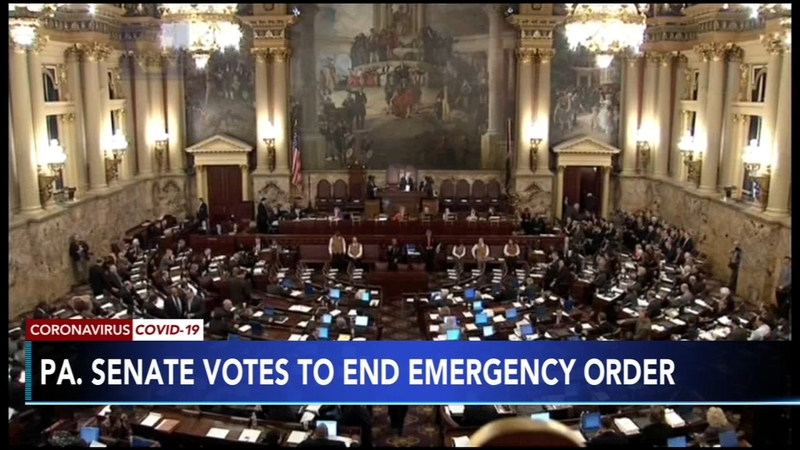 There may be little immediate effect on daily life, for now.

The legislation is a centerpiece of the Republican response to Wolf's sweeping use of authority during his COVID-19 response, spurring Republicans to liken the Democratic governor to a tyrant or dictator.

The Wolf administration maintains that dissolving the disaster emergency does not affect a health secretary's disease-prevention authority to issue mask-wearing and stay-at-home orders or shut down schools and nonessential businesses.

Wolf, in any case, has ended those measures, as the vaccine has stemmed the spread of the virus. The exception is a mask mandate for unvaccinated adults that tracks federal guidance.

Still, Republicans framed Thursday's votes as carrying out the will of the people in last month's statewide referendum. In it, voters approved a Republican-penned constitutional amendment to give lawmakers broad new power over extending and ending disaster emergencies.

"The people of Pennsylvania wanted the emergency to be over," Senate Majority Leader Kim Ward, R-Westmoreland, said during floor debate. "It's over. It was going to be over at some point, and it's over today."

Ending the disaster emergency is purely political theater for Republicans as long as they are extending the regulatory waivers that are the key component of a governor's authority under a disaster declaration, Democrats said. The suspended regulations cover a wide swath of government functions and the economy, including over licensing, inspections and training,

The bill to extend the regulatory waivers would keep the regulations suspended until Sept. 30, unless Wolf's administration ends the waivers sooner.

It passed the House and Senate unanimously, but still required approval from Wolf. Republicans had haltingly decided to extend the waivers at Wolf's urging. Wolf will sign it, his office said.

During floor debate, they accused Republicans of undertaking an experiment that could hamstring a state response to a resurgence of COVID-19 and risks losing tens of millions each month in federal emergency food aid for the poorest families.

The resolution passed the chambers with every Republican in favor of it and all but nine Democrats against it. It does not need Wolf's approval.

Republicans say they expect that federal aid will continue and that Wolf can declare another disaster emergency, should he need to. Lawmakers, though, would have the newly granted authority under the referendum to end a new declaration by a majority vote, rather than the two-thirds vote necessary previously.

In a statement, Wolf's office said he was disappointed that lawmakers would not extend the disaster declaration.

"To avoid serious consequences, the administration will do everything it can to work with the federal government to try to maintain federal funding in the absence of a declaration," Wolf's office said.

Republicans and Democrats also quarreled over whether the resolution can take immediate effect, since the state has not yet certified the results of last month's referendum.