Police get help coping with heat during DNC 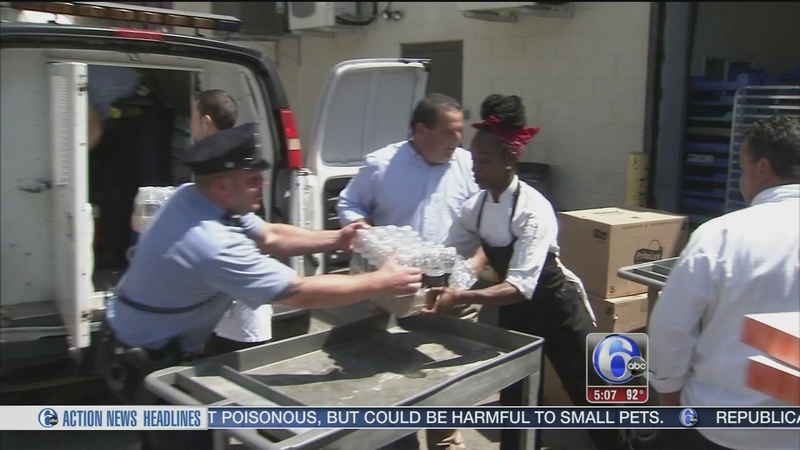 CENTER CITY (WPVI) -- "I thought mine was sick," said one to another. "You got a sicker one than me."

Philadelphia Police officers joked about their farmers' tans as they piled on their gear for yet another day in the blazing sun.

They have been busy keeping order in a sweltering city that's hosting everyone from protestors to presidents.

"How are you managing out there?" they were asked. "Pretty good," came the reply. "Lot of water. Lot of Gatorade."

And the community has been pitching in to keep them healthy.

In the city's Spring Garden section, Cescaphe Event Group loaded up a police van with hundreds of bottles of water along with sandwiches and donuts, while Target in South Philadelphia donated cases of drinks and snacks.

"We decided to give back to police officers who are helping protect us during the DNC, making sure everything runs smoothly," said Target spokesperson Brooke Uditsky.

By the Wells Fargo Center, Philadelphia Police Captain Deborah Francis picked up lunches for her officers courtesy of MBB management.


"We put together box lunches for police officers," said MMB's John Moser. "They get a hoagie - Italian, turkey - American potato salad and beverage."

"It's grueling," said Francis, "because you have to be on post for long periods.... And to have someone donate food and water to us makes it better for us. It's excellent."

The 2nd Alarmers Association has been helping Philadelphia Police for 95 years.

With seemingly nonstop protests this week, they're needed more than ever.

So far they've handed out more than 6000 bottles of water and the electrolyte-filled lime flavored bug juice.