Bernie Sanders cancels on PA delegates due to scheduling conflict 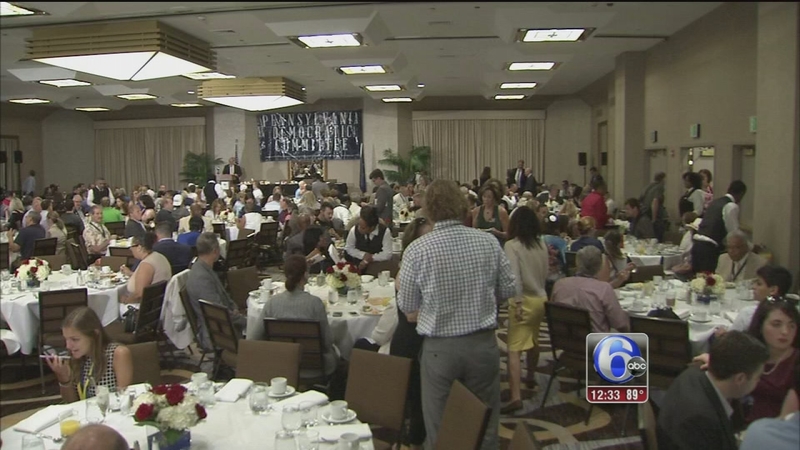 PHILADELPHIA (WPVI) -- Pennsylvania delegates were expecting Bernie Sanders as their guest at their Wednesday breakfast to start Day 3 of the Democratic National Convention, but the Vermont senator canceled.

According to the delegation, Sanders canceled his appearance in Center City Philadelphia sometime overnight due to a scheduling conflict.

Actor, activist, and 'Feel the Bern' supporter Danny Glover was expected to speak on his behalf at the breakfast.

Action News was told by organizers that Sanders' representatives reached out to Glover last minute, but his previous appearance went too long and he was overbooked.

Sooooo Danny Glover didn't show at The PA Delegate Breakfast ... We were told he would replace Sander's spot as speaker today @6abc

While Sanders did not show up, their support for him has gone unwavered.

Instead of feeling the Bern, Sanders supporters are grieving.


Action News spoke with Bucks County Sanders delegates, who will now vote for Hillary Clinton, but are not abandoning Bernie's movement.

"Getting involved, protesting when you are upset about something, calling your senator, realizing that people make change," delegate Jordyn Tannenbaum said.

"I couldn't be more excited that we are going to do something so important historically. For God's sake, isn't it about time we have a woman president here in the United States?" Lt. Gov. Mike Stack said.

"I think Donald Trump is diametrically opposed to all of the things they care about. While Hillary Clinton may not have been their chosen candidate in the beginning, she is by far the best alternative," Montgomery County Commissioners Chairman Josh Shapiro said.

Former Pennsylvania congresswoman Marjorie Margolies is a delegate this year.

She is also Chelsea Clinton's mother-in-law. Chelsea is married to Margolies's son Mark Mezvinsky and on Thursday, the former First Daughter will introduce her mother in a highly anticipated speech.

"She's smart and kind and incredibly articulate, I don't think she'll be nervous at all,"
"I think she will do what she does best, she will outline for all of us why her mom would be a terrific president," Margolies said.