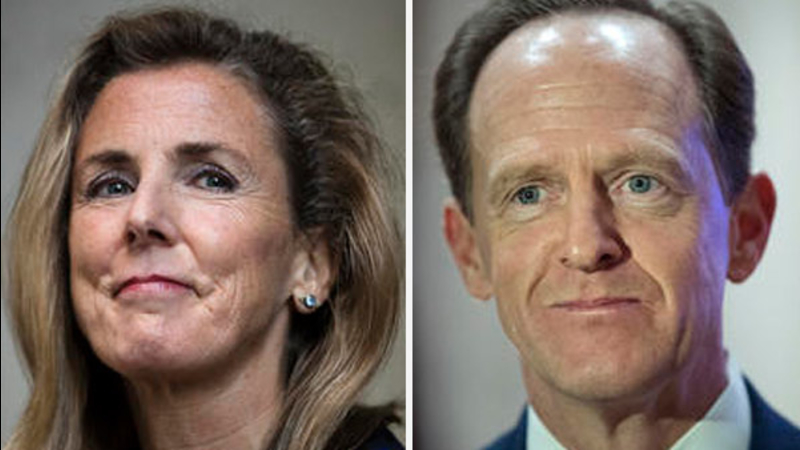 PHILADELPHIA (WPVI) -- The presidential election is weighing heavily on Pennsylvania's race for the U.S. Senate.

Democrat Katie McGinty is trying to unseat Republican Pat Toomey, but the latest poll has the two in a statistical dead heat.

"The campaign is going really well. I feel really good about where we are," Toomey said on Tuesday.

At a $50 per ticket fundraiser, he continued to try to put as much space as possible between himself and GOP presidential nominee Donald Trump, while simultaneously take the standard shots at the Democratic nominee Hillary Clinton.

"I think we have two badly flawed candidates, that's my view on this. I've been very clear on it, and I've been openly very critical of policy positions that Donald Trump has taken," said Toomey.

McGinty, meanwhile, continues to hang Trump around Toomey's neck as she hammers him for refusing to say whether or not he will vote for Trump, even in the wake of last weekend's release of Trump making lewd remarks about groping women.

"It's unacceptable for our senator to have stood silent for so long in the face of a campaign that has been divisive and disgusting," McGinty said.

"The problem facing Republicans on the ballot with Donald Trump is that they need the Trump voters, but they also need Republican voters who don't support Trump," said Prof. Matthew Kerbel of Villanova University.

Toomey counters, saying McGinty is a big tax-and-spend liberal, who never dares go after Hillary Clinton for her scandals.

"How about the fact that Hillary Clinton has spent her career lying to the American people," said Toomey.

McGinty knows that Donald Trump is red meat for her Democratic base, and won't let go of the Trump tape.

"What we heard on Friday is what we have known: that Donald Trump is lewd, lecherous, a low-life," McGinty said.