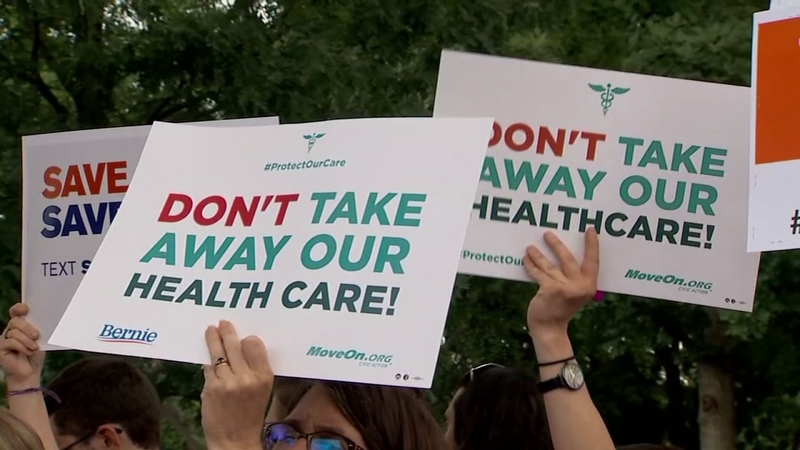 WASHINGTON -- Three months ago, Republicans condemned political groups aligned with President Donald Trump for doing almost nothing to promote a health care bill. Now they think one of the groups may have gone too far.

Senate Majority Leader Mitch McConnell decided Tuesday to call off a planned vote this week on a proposal to repeal and replace former President Barack Obama's health care law. Some on the Hill blamed the unexpected delay on aggressive tactics by America First Policies, a politically active nonprofit run by a former White House aide and Trump campaign veterans.

The group spent four days on a pull-no-punches campaign against Republican Sen. Dean Heller of Nevada, beginning shortly after he surprised members of his own party with a Friday afternoon news conference denouncing the Senate plan as written. Heller expressed concern about Medicaid cuts in the GOP bill.

In a social media push, the group first roped Heller to House Minority Leader Nancy Pelosi. By Tuesday morning, ads had spread to radio and television in Heller's home state, where he faces a tough re-election fight next year.

"Call Senator Heller. Tell him America needs him to keep his promise: Vote 'yes' to repeal and replace Obamacare," the ads say.

McConnell told White House chief of staff Reince Priebus over the weekend that the group's attacks were "beyond stupid," according to a Republican with knowledge of the exchange. The person demanded anonymity to share the private conversation. McConnell allies argued that the approach alienated Heller and other Republicans rather than making it easier to get their votes.

Heller brought up the ads when he and other Republican senators met with Trump on Tuesday at the White House, according to South Dakota Sen. John Thune.

Shortly thereafter, America First Policies said it decided to take down its Heller ads because "he has decided to come back to the table to negotiate with his colleagues on the Senate bill," spokeswoman Erin Montgomery said.

Across social media and on cable shows, Republican strategists denounced the intra-party battle as counterproductive. "More than political cannibalism, attack ads vs Heller are shortsighted, disrespectful to voters who sent him there to vote his conscience," Republican political commentator Ana Navarro wrote on Twitter after making that same point on CNN late Tuesday.

But so far, the group makes no apologies for its aggressive strategy.

"It's not AmericaFirstPol job to protect R seats. It's to support/promote #AmericaFIRST policies. If you don't we'll let your voters know," the group's communications chief, Katrina Pierson, wrote on Twitter Tuesday afternoon.

She attached an American flag emoji and wrote her message in response to a tweet asserting that McConnell was irritated about the group's Heller ads.

A person familiar with America First Policies' decision-making said the group watched Heller's press conference and viewed him as a lost cause - unless some bold action shook him up. The person demanded anonymity to discuss political strategy.

The group's idea: Perhaps other wavering Republicans would see the Heller haranguing and decide to vote yes.

The person added that the radio and television ads against Heller took a milder tone than the initial social media campaign, simply urging voters to call him to express their frustrations. They were similar to a batch of ads that America First Policies piped into states with Democratic senators who could face tough re-election campaigns.

America First Policies, which is not legally required to disclose its donors, had planned to spend $1 million or more on Heller ads, and it telegraphed its plans through the media. The group also had threatened to expand its TV advertising to include other GOP senators opposing the bill: Texas Sen. Ted Cruz, Utah Sen. Mike Lee, Wisconsin Sen. Ron Johnson and Kentucky Sen. Rand Paul.

The pro-Trump engagement marks a dramatically different approach than during the first health care debate of his presidency.

In March, Republicans - both on Capitol Hill and in the White House - trashed America First Policies and other outside groups supportive of Trump for sitting on their wallets as House Speaker Paul Ryan's health care plan fell apart.

The House later revived its bill, but in the aftermath of the initial failure, the White House dispatched deputy chief of staff Katie Walsh to America First Policies. Walsh was a longtime top lieutenant to Priebus, first at the Republican National Committee and then in the White House.

"It was abundantly clear that we didn't have air cover when it came to calls coming into lawmakers," Priebus said when Walsh joined the group. "No one can fix this problem better than Katie."

Brad Parscale, the Trump campaign's digital and data director, and Nick Ayers, a political adviser to Vice President Mike Pence, also are involved in the group.

There are several outside efforts to promote Trump's agenda, but America First Policies has the closest ties to the Trump family and is seen by donors as being the preferred group - on par with the Organizing for Action nonprofit that President Barack Obama's former campaign aides started to help him.

Asked Monday whether the White House approves of the Heller ads, press secretary Sean Spicer declined to answer directly, instead saying "we're going to work with all of the senators to try to get their support."