Trump's military parade: Everything we know about the Nov. 10 event

WPVI
WASHINGTON -- President Donald Trump's upcoming military parade is expected to cost $12 million, a U.S. official told ABC News. That official warned that the $12 million figure is a preliminary estimate that could change depending on the size and scope of the event.

The parade is set to take place on Saturday, Nov. 10, 2018, in Washington and will commemorate the 100th anniversary of the end of World War I. It was originally scheduled to coincide with the city's Veterans Day parade on Sunday, November 11.

As many as 7,000 service members could march in the parade, according to a U.S. defense official familiar with parade planning documents. Up to 3,000 people are expected to be involved in the planning of the event.

According to a memo from Gen. Joseph Dunford, the parade will stretch from the White House to the Capitol and will feature "a heavy air component at the end of the parade." The event will make use of period uniforms, though there will be no tanks in an effort to "minimize damage to local infrastructure."

"This parade will focus on the contributions of our veterans throughout our history of the U.S. military, starting from the Revolutionary War and the War of 1812 to today, with an emphasis on the price of freedom," the memo explained.

It will be the first national military parade of its kind in more than 25 years. The Desert Storm Victory Parade in 1991 marked the last time the military took to the streets in such a fashion.

Approximately 800,000 people turned out on June 8, 1991, for the 2.5-mile parade, the Washington Post reported the next day. That event, which featured 8,800 war veterans, cost approximately $12 million before inflation. 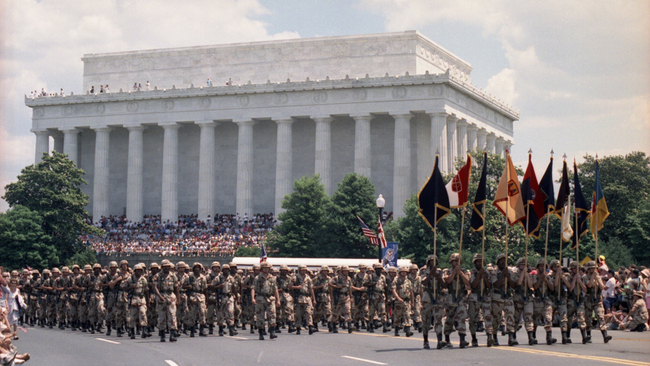