WPVI
By Jeff Chirico, Gray Hall and Bob Brooks
PHILADELPHIA (WPVI) -- In the City of Philadelphia and surrounding suburbs, voters are heading to the polls in droves - sometimes waiting in long lines - to choose the next President of the United States.

It's an election that has captivated the country and people of all ages.

Students of the Independence Charter School told us they were doing their civic duty on Tuesday by reminding people to enthusiastically get out and vote.

From what we've heard, the turnout in Center City appears to be as historic as the election.

"We can tell by the trajectory there's been more votes certainly than the last presidential election," said Linda Hahn, 5th Ward, 6th Division.

Hahn spoke with us at the polling location at 10th and Locust at Jefferson Hospital.

She says there's a huge turnout of a demographic she's not used to seeing.

"There's so many young voters. Just a tremendous amount of young voters, and were just so pleased," said Hahn.

Lines wrapped around the block at multiple polling places in Center City. Share your voting pics with #6abcAction pic.twitter.com/7miywWB8Gz

She says if you show up, you'll get to vote not matter what.

We're also told by workers at the Broad and Pine polling place, the same thing, a huge turnout.

But two of their machines broke this morning, which created an even bigger wait before work.

They say people waited and were late to work - they wanted to vote.

Never have I seen the polls like this 7am...4 times as much as usual, massive line waiting to get in lot #6abcAction #perkasie #eastrockhill pic.twitter.com/GOSbkjHYOj

It certainly seems like the student's message is being heard.

But not everyone was sold on a candidate.

Some exercised their right not to choose any candidate.

"I actually didn't vote for anyone. I just voted for the ballot measures," said John Zaie of Center City.

In Southwest Philadelphia, like thousands of other locations across the county, the image is the same, eager voters are headed to the polls, some of them were first-time voters and everyone wanted their voices heard.

"Everyone is doing it. This is the big one. I had an opinion for once about who was more compassionate of the two, and it got my heart and taught me to do somethings, so I took action," said Hung Lee of Southwest Philadelphia.

"Make a difference, start to vote, do something, make a change," said Lena Huynh of Southwest Philadelphia.

Voters admit this election cycle has seemed never-ending, loaded with negative political ads. Many say they are ready for it to be over.

Poll workers at Thomas G. Morton Elementary tell us it has been a steady flow of voters and no major problems. They have eight divisions in one location, and expect to see crowds increase as people get off work. Voters we talked to were energized, and, of course, feel their candidate will be the next President of the United States.

"We need a grown person in there. Someone that is going to take care and understand us, and Donald Trump is only taking care of hisself and understand hisself," said Joseph Burrell of Southwest Philadelphia.

"Landslide hopefully. I hope these votes and everything counts, so hopefully it will be a landslide," said Benjamin Wilson of Southwest Philadelphia.

Much like the city, the Philadelphia suburbs have seen high-voter turnout all day.

Susan Seidler is volunteering for the Democrats outside the Warminster Heights Community Center.

"This is one of the scariest elections," said Seidler.

All 12 U.S. House seats in New Jersey are on the ballot along with county and local races.

A morning rush of voters petered by midday.

From Horsham to Jenkintown to Wyncote, where voters are determined to have the last word after a bruising campaign season.

"The campaign has been so draining. I'm almost a little happy that it's over so we can just get out and vote," said John Schoffner of Horsham.
"This has been such an embarrassment the way all of this thing has gone down," said Steve McMillan of Jenkintown.

"There's a heavy turnout, and since this is a heavily-Democratic area, it doesn't bode well for our candidates," said Jim Schott, Republican Party Committeeman.

"What I saw this morning genuinely brought a tear to my eye because I saw people I haven't seen in line before, but I've seen a lot of new faces. And people were very determined," said Regina Gordon, Democratic Party Committeewoman.

"Debt is too high. We gotta get it down. Hillary can't do it, but I think Trump can," said Jim Kennedy of Horsham.

"First woman president. This is going to be great for everyone including our daughters," said Jackie Lamplugh of Jenkintown.

What happens in these communities could determine the race. Some high stakes that rests on voters' shoulders.

"This is a big deal because these two candidates are so far apart on just about everything," said Steve McMillan of Jenkintown.

Across Delaware County, reports of heavy turnout. At Concord 3, a reported 82 percent by 4 p.m.

In Media, sizable numbers reported as of 3 p.m.

"At this point, we're over 600 just here at Western Precinct, which averages out to about 100 voters an hour, and that's considerable," said Monica Simpson of Media.

At Media East at the Borough Hall, 800 is considered a heavy turnout for a presidential election - by 3 p.m., they had voted 727.

Suzanne Boyer, who voted this afternoon, first stopped by this morning on the way to work, but could not believe her eyes.

"It's the longest line I've seen in all the presidential elections I've voted in. By far the longest lines, even with Obama's election, so it's very surprising," said Suzanne Boyer of Media.

Boyer said that suggests to her people are very worried about who's going to be the next President of the United States.

Pollsters have said the vote in the Philadelphia suburbs could be one of the key deciding factors in determining our next president.

Turnout was brisk at the West Trenton Firehouse on Upper Ferry Road in Ewing Township, N.J. 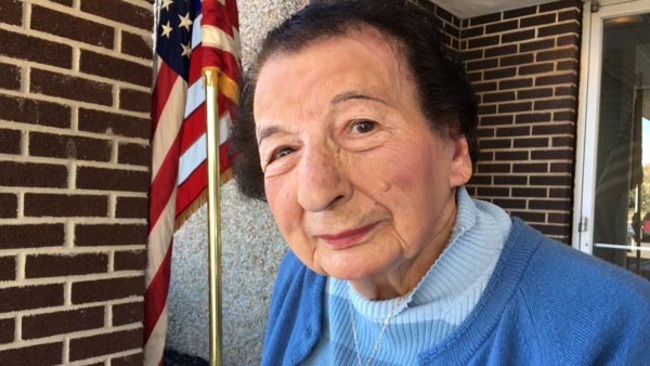