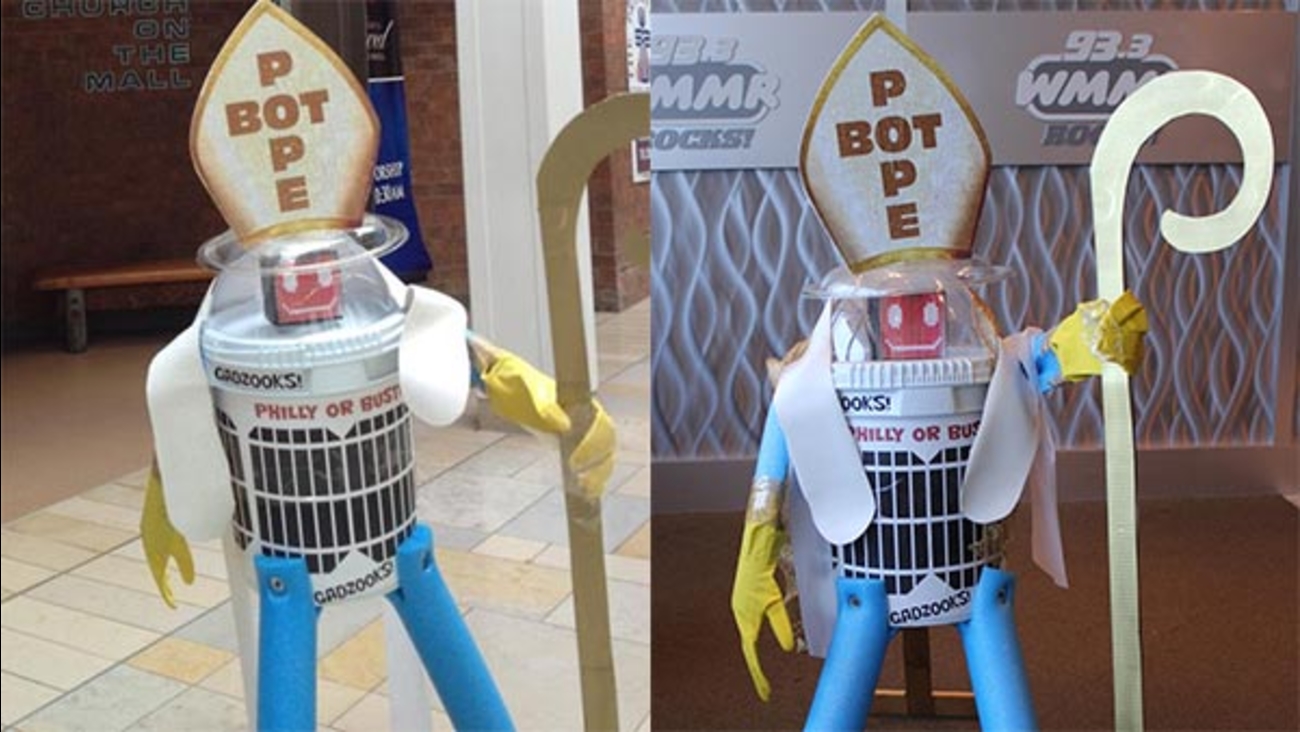 PHILADELPHIA (WPVI) -- A few weeks ago, hitchBOT's journey may have ended in Philadelphia, but a new robot has set out to prove the city is safe for all robotkind. Meet Pope Bot.

The bot made its debut on the Preston and Steve Show on radio station WMMR Monday morning.

Meet @PopeBotPhilly! He is beginning his journey around the Philly area today. Follow along http://t.co/RoFb71KgpT pic.twitter.com/BuV7Vumlvu

"It's a test to see if the average person or people of Philadelphia are kind enough, gentle enough to treat Pope Bot with respect and take it from place to place and have it be just fine," radio host Preston Elliot said.

The radio station is hoping Pope Bot's successful odyssey will show that Philadelphia and its residents are more than ready for Pope Francis' visit next month.

"To show this area is loving, caring, nurturing and can serve as a proper host for the actual pope," radio host Steve Morrison said.

Pope Bot was created in part due to the destruction of hitchBOT, a hitchhiking robot that captured the hearts of fans worldwide.

The Canadian researchers who created hitchBOT as a social experiment told The Associated Press that someone in the city damaged the robot beyond repair two weeks ago, ending its first American tour after about two weeks.

"Sadly, sadly it's come to an end," Frauke Zeller, one of its co-creators, said.

Hitchbot is out. @PopeBotPhilly is in.

Pope Bot's excursion began outside WMMR studios in Bala Cynwyd, Pa. where he was picked up and brought to Malvern, Pa.

Ready for my journey! Let's show the rest of the country how kind (gentle & responsible) we can be. #PopeBotPhilly pic.twitter.com/r5t72Qobph

From there, Pope Bot has traveled to the Exton Square Mall, Plymouth Meeting Mall, Valley Forge, and Chestnut Hill.

He was then spotted rock climbing in East Falls!

So, how do we get down?! #Repost @timbrewolff ・ Ascending a little closer to heaven, and Philadelphia. @prgeastfalls pic.twitter.com/IL3z7E3WeN

There are some rules to know if you want take Pope Bot for a ride. Each person has a two hour limit with Pope Bot and then you must leave it in a safe place, sharing its location on social media using #PopeBotPhilly.

Even though Pope Bot's mission is less than a day old, the World Meeting of Families has already taken notice.

"Dear Phila: Please, please be kind to @PopeBotPhilly! This is our chance for a major do-over!" Executive Director Donna Crilley Farrell tweeted.

Dear Phila: Please, please be kind to @PopeBotPhilly! This is our chance for a major do-over!