How $38 Million In Cocaine Was Seized at Port of Philadelphia 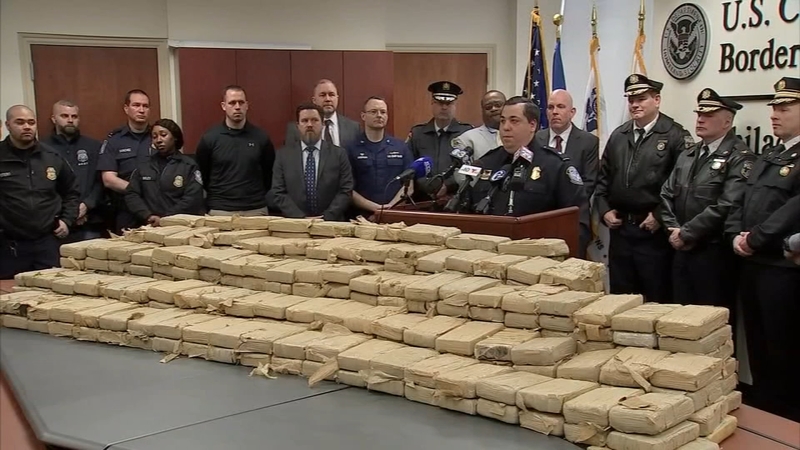 Officials: Cocaine seized at Port of Philadelphia worth $38 million

PHILADELPHIA (WPVI) -- A total of 450 bricks of cocaine, weighing 1,185 pounds with a street value of $38 million, was put on display at the U.S. Customs House on Thursday.

Law enforcement officials say it's their biggest cocaine bust at the Port of Philadelphia in 21 years.

The investigation began with officials tracking containers from Central America.

Joseph Martell with the US Customs and Border Protection said, "South and Central American transnational criminal organizations continue to smuggle dangerous drugs into the United States."

US Border and Customs Protection says the container with the drugs inside left from Guatemala.

They began tracking it based on historical data proving containers from there pose a higher threat.

Next it went through ports in Panama and the Bahamas before arriving here earlier this week.

By the time it did, officials say their teams were ready to search it.

Martelli said, "During the inspection of the shipping container a narcotics detective dog alerted us and we discovered 13 black duffel bags of a white powdery substance."

As we told Philadelphians about the bust, the staggering numbers prove to be shocking - and alarming.

A woman named Shirley of Northeast Philadelphia wasn't shy about her past with cocaine.

She said, "Yeah I was young. I'm not gonna lie about it but it ain't no picnic."

She just hopes more busts like this can keep coming.

Shirley said, "They should get the heroin off the streets too because it's killing these kids."

Now the next steps for the investigation is to try and figure out who put the drugs in the container.