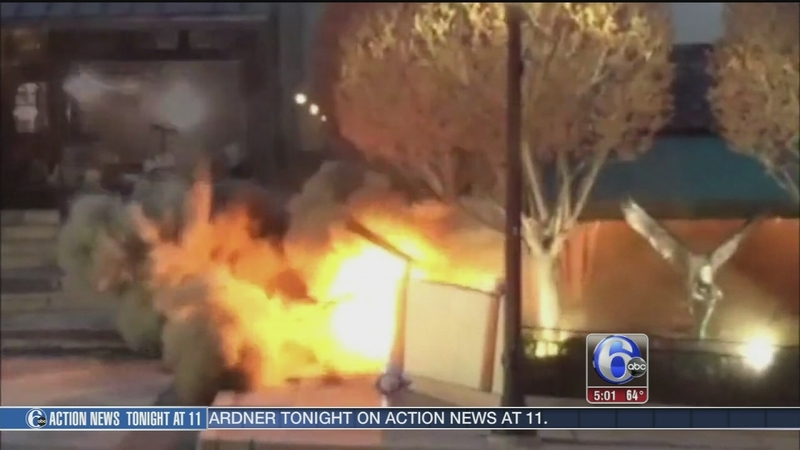 It was a close call for a lot of people who were dining outside near the blast, and for others in nearby stores and restaurants.

"Oh, my God. My one employee was . . . Literally, I didn't know if I was going to look and see him dead there. I was afraid," said Frank Nattle.

Nattle was inside his pizza parlor that's all boarded up now.

He says there was trouble with the electricity all day on Monday, and they became concerned when sickening fumes started seeping from the manhole outside.

Outdoor diners were saved only by an iron fence that deflected the manhole cover.

There was chaos inside the pizza parlor.

"The windows came flying in, tables and chairs went flying. Lights came off the wall. Nobody got hurt, luckily. I can't imagine how somebody didn't get hurt. There were people in that window eating five minutes before. Everybody was just getting out there," said Nattle.

It was like a bomb had gone off. People scrambled to safety.

PECO says it doesn't know yet what caused the explosion, possibly expanding air inside the cable insulation as the cable heated up.

But they need to dig up the street to find out.

That process was delayed as smoke again began pouring from the manhole around mid-morning.

It was frustrating for shop owners who have lost their power.

"My salon is all closed off and the electrical panel's all blown out in my shop," Sabette Thach of Polished Salon.

Most of the damage is in the Suburban Building. The landlord says it will be awhile before they can reopen.

"They may not let us in today," said Bill Connor of 134 Partners. "There's some damage inside the building. Once the township gives us permission to get in, we'll have to have an engineer do an assessment and begin to make repairs to the building."

PECO now says it will be late Tuesday afternoon before they can fully assess the situation and get the repairs done.