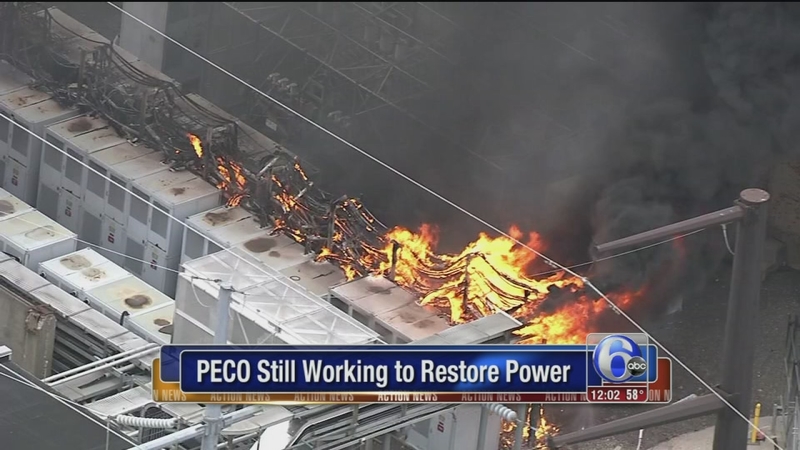 NORTH PHILADELPHIA (WPVI) -- PECO is still trying to restore power to some of its customers after Tuesday's massive fire at a substation in North Philadelphia.

As of noon Wednesday, the electricity remained off at hundreds of businesses and homes. And two nearby schools were closed.

Peco unable to restore remaining customers by switching them to another circuit so bringing in external generators. pic.twitter.com/6Qs4xPEhIC

School officials say all after-school activities scheduled for Wednesday, including all athletic programs and professional development sessions, are canceled as well.

Peco says customers that remain without power are mainly in the immediate area around North Philly substation. pic.twitter.com/9VaU6rgURe

Wednesday morning at some of the bigger intersections like Fox and Allegheny, generators chugged along, powering the traffic lights.

But they were still dark at others like 23rd and Clearfield, where drivers took turns going through. Officers were posted on some corners.

Philadelphia firefighters battled the fire at the PECO substation in North Philadelphia on the 2600 block of West Westmoreland Street for hours Tuesday.

The fire caused thousands of customers, including the two school buildings, to lose power. Traffic lights in the area also stopped working.

PECO crews worked to re-route power, while generators arrived at the Westmoreland station to get service restored to the remaining customers. At its peak, the outages reached 36,000.

St. Christopher's Hospital's outpatient center, which consists mostly of administration offices, was closed because of power loss. The hospital itself, however, never lost power.

Power inside the substation prevented firefighters from working on getting the fire under control for hours, Philadelphia Fire Commissioner Adam Thiel said.

The fire broke out shortly after 2 p.m. Close to three hours later, the power was turned off in the substation and firefighters began knocking down the fire.

Authorities evacuated one apartment building in the vicinity of the fire as precaution because there was a concern about toxic fumes.


Residents and businesses are right now in the dark as crews battle PECO substation blaze in NE @6abc pic.twitter.com/PFh4Nk6chz

The power outages sent traffic into chaos as traffic lights were rendered useless.

The traffic became gridlocked near the PECO substation fire.

Chopper 6 was over Henry, Hunting Park and Allegheny avenues where buses and vehicles tried to make their way through the intersection.

No injuries were reported and a cause is under investigation.
------