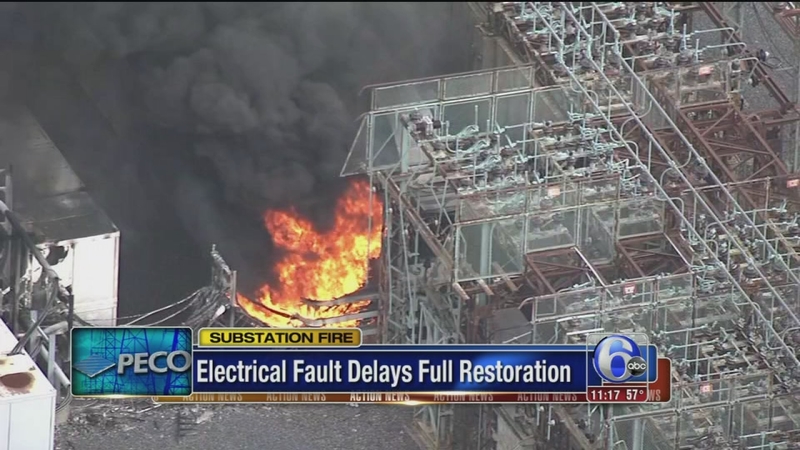 A spokesperson for the utility says they're down to just 900 customers without power.

But in an effort to re-route electrical service in North Philadelphia, there was a fault that knocked another 1,000 people offline.

While PECO workers assessed the fire damage Wednesday, others worked to restore power in North Philadelphia.

Among the questions Wednesday for workers: What went wrong and why?

Tuesday's blaze melted aluminum cables that supply power to nearby streets, meaning those closest to the substation are likely to be among the last get power back.

Folks on Wednesday waited in the warm sunshine, hoping for restoration before nightfall.

"Last night was really dark. It was really eerie. No street lights. You'd be surprised how dark it can get," said Diane Dantzler of North Philadelphia.

Firefighters had to wait almost three hours Wednesday to put water on the intense fire.

The reason: 13,000 volts of electricity was flowing through the burning cables. Water can act as an electrical conductor. Had firefighters used water on the live cables, a bad fire could have been deadly.

"There are minerals in that water that can interact with electricity, and unfortunately cause electrocution or harm to those that may be fighting the fire," said PECO spokesperson Ben Armstrong.

PECO says de-energizing a substation of this size is not a simple matter.

First three high-voltage feeds of up to 220,000 volts had to be interrupted at Roxbourgh, Whitpain and North Philadelphia. Once that was confirmed, there were more steps to take.

"We not only remotely opened the switches to stop the flow of electricity at this facility, we also confirmed manually, at this facility, there was no power flowing in the area where these firefighters were about to fight this fire," said Armstrong.