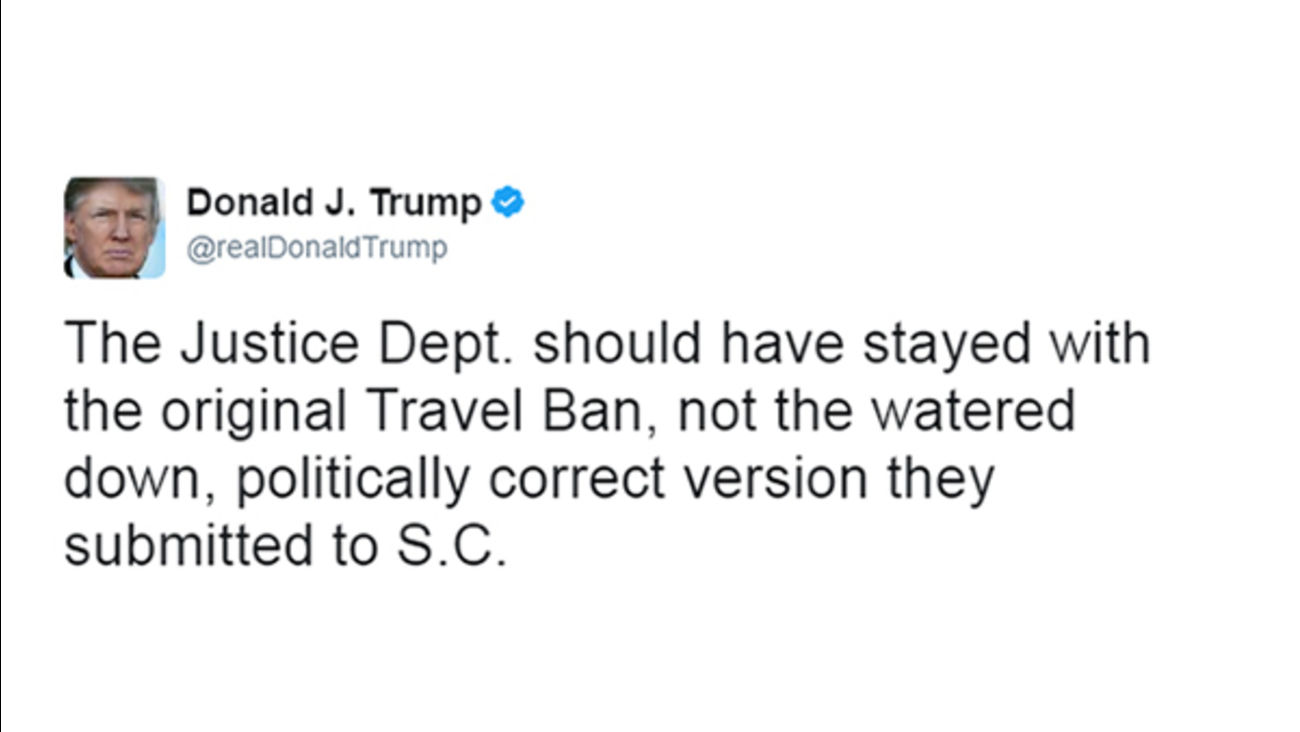 WASHINGTON -- President Donald Trump lashed out at his own Justice Department Monday for seeking the Supreme Court's backing for a "watered down, politically correct version" of the travel ban he signed in March instead of pursuing a broader directive that was also blocked by the courts.

In a series of early morning tweets, Trump urged the Justice Department to ask for an "expedited hearing" at the high court and seek a "much tougher version" of the order temporarily blocking entry to the U.S. from a half-dozen majority Muslim countries. He called the courts, which have blocked both versions of the travel ban, "slow and political."

People, the lawyers and the courts can call it whatever they want, but I am calling it what we need and what it is, a TRAVEL BAN!

The Justice Dept. should have stayed with the original Travel Ban, not the watered down, politically correct version they submitted to S.C.

The Justice Dept. should ask for an expedited hearing of the watered down Travel Ban before the Supreme Court - & seek much tougher version!

In any event we are EXTREME VETTING people coming into the U.S. in order to help keep our country safe. The courts are slow and political!

The president has intensified his push for the travel ban in the wake of the vehicle and knife attack in London that left seven people dead and dozens injured. The Islamic State has claimed responsibility for the attack.

Trump's Twitter barrage risked undercutting his administration's legal arguments in support of presidential directive, which he argues is crucial to safeguarding American security. The administration's lawyers and White House spokesman Sean Spicer have argued that the executive order has no connection to Trump's campaign calls for a temporary "Muslim ban" and have disputed the characterization of the order as a travel ban.

Yet the president on Monday said the order was exactly that.

"People, the lawyers and the courts can call it whatever they want, but I am calling it what we need and what it is, a TRAVEL BAN!" he wrote on Twitter.

Trump has used attacks around the world to justify his pursuit of the travel and immigration ban, one of his first acts since taking office. The original order, which was signed at the end of his first week in office, was hastily unveiled without significant input from top Trump national security advisers or the agencies tasked with implementing the order.

After that order was struck down by the courts, the administration decided to write a second directive rather than appeal the initial ban to the Supreme Court. The narrower order temporarily halts entry to the U.S. from Iran, Libya, Somalia, Sudan, Syria and Yemen is necessary to protect U.S. national security.

Iraq was removed from the list of banned countries in the second order and an indefinite halt to entry from Syrian refugees was replaced by a temporary pause. Still, the courts have also blocked that directive.

Last week, the Justice Department formally asked the Supreme Court to let a ban be put in place. The high court also is being asked to uphold the constitutionality of the Trump travel policy, which lower courts have blocked because it shows anti-Muslim prejudice.

It was not immediately known when the Supreme Court will make its decision on whether to hear the case.