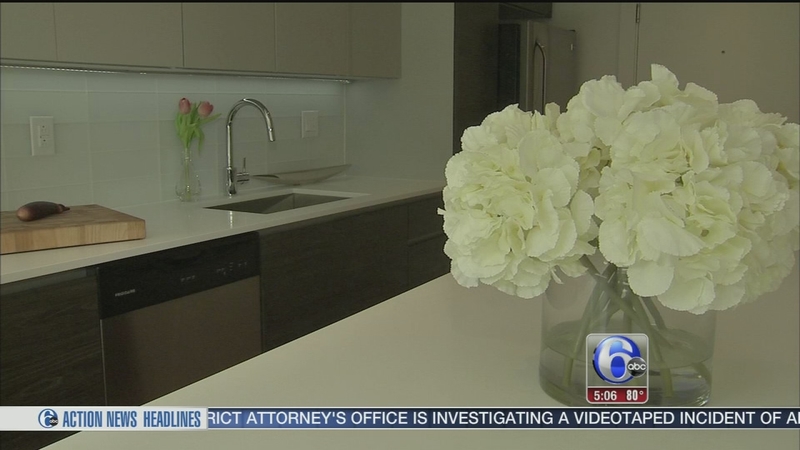 WYNNEFIELD HEIGHTS (WPVI) -- A landmark apartment complex in Philadelphia has gotten quite the makeover - a $100 million makeover. And today was the big unveiling... well, partially anyway.

What used to be the Presidential Apartments is now a luxury complex fit for a king.

Since the 1950s the Presidential Apartments have loomed over City Avenue at the Expressway. Now the four aging towers named for the first presidents are getting a new lease on life.

Dubbed 'Presidential City', the units are upscale, each with a high-end kitchen. A bathroom with double sinks, softly illuminated mirrors, and state of the art shower heads.

CEO of Post Brothers Apartments Michael Pestronk showed us what a $100 million makeover can do.

Once drafty windows have been replaced by heavy insulated units that keep sound and heat out.

Above, standard ceiling fans and LED lighting. And 11 foot wide closets with built in washer and dryer.

Pestronk says, "All of the appliances are Energy Star appliances. The washer/dryer is a front load Electrolux washer/dryer, so it's very water efficient."

As for the rent for this one bedroom unit?

Pestronk says some who thought they wanted a Center City address have opted for the amenities here.

To sweeten the deal, by fall the construction zone outside the building is due to become a resort complex of pools, hot tubs, cabana's and an exercise center - all at no extra cost.

So far, about half of the first 180 units have been rented. Eventually there will be more than 1,000 units.