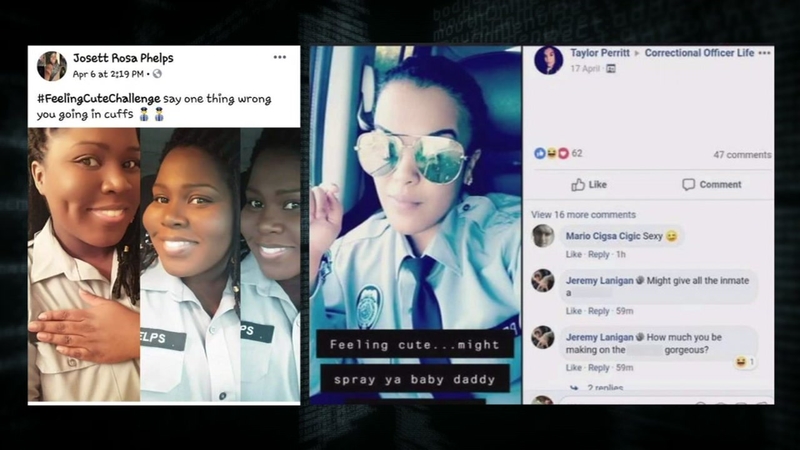 The pictures appear to be mocking violence against inmates.

A member of the group alerted WTVD-TV to the pictures.

One picture shows a correctional officer, who works at Central Prison in Raleigh, with the caption "#FeelingCuteChallenge say one wrong thing you going in cuffs."

The other picture is of a correctional officer from Scotland Correctional Institute, in Laurinburg, that reads "Feeling cute...might spray ya baby daddy."

WTVD-TV reached out to prison officials about the guards and the photos.

A spokesperson for the North Carolina Department of Public Safety provided the following statement from Director of Prisons Kenneth Lassiter:

The North Carolina Department of Public Safety has been made aware of the "Feeling Cute Challenge" social media campaign. These correctional officers do not represent the Department, the Division of Adult Correction and Juvenile Justice, or the thousands of hard-working professionals who potentially put their lives at risk daily keeping the citizens of North Carolina safe. Prisons' administration is reviewing and will take appropriate action.

DPS officials said they are not aware of any other employees who have participated in the "feeling cute" challenge.
Report a correction or typo
Related topics:
north carolinasocial mediau.s. & worldprisoninvestigations
Copyright © 2021 WPVI-TV. All Rights Reserved.
TOP STORIES
AccuWeather Alert: Nor'easter to bring rain, wind | Track the storm
NJ Gov. Murphy declares State of Emergency ahead of nor'easter
7-year-old struck, killed by hit-and-run driver in Philadelphia
SEPTA releases guide for riders in case of strike | What to know
2 killed and 4 injured in Idaho mall shooting
NY couple sentenced in assault on 17-year-old Sesame Place worker
No charges filed yet after Texas kids left with skeletal remains
Show More
New York Jets bring back veteran QB Joe Flacco in trade with Philad...
Man admits to throwing wife's body out of plane after killing her
Nonprofit helping to support veterans in Philly region
After Brian Laundrie found, family says they will not hold funeral
Police searching for man accused of trying to abduct toddler
More TOP STORIES News