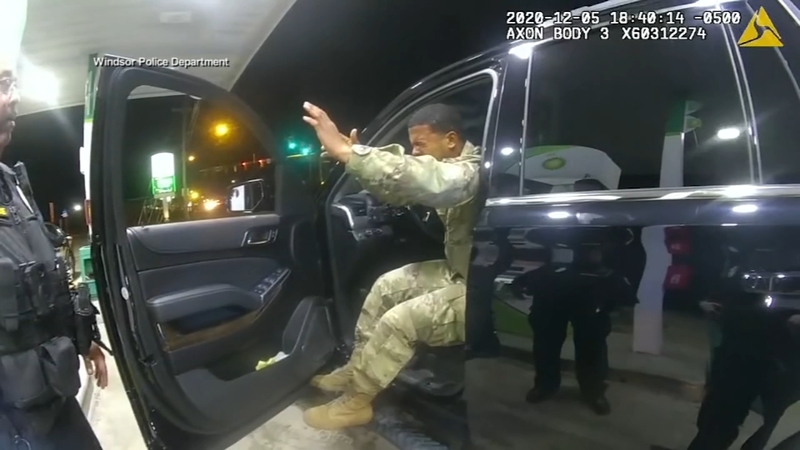 The Virginia prosecutor who will decide whether to pursue criminal charges against two police officers involved in a traffic stop where Black Army 2nd Lt. Caron Nazario was hit with in the face with pepper spray has begun reviewing the case.

Nazario was pulled over by Windsor police officers Joe Gutierrez and Daniel Crocker on Dec. 5, 2020, while in uniform. Body camera footage from the incident showed the officers pointing their guns at Nazario and Gutierrez dousing him with pepper spray.

Hampton Commonwealth's Attorney Anton Bell, who was appointed as special prosecutor in the case last month, told ABC News he received the case a "few weeks ago" and is reviewing the file.

"I make my decisions based on the facts and the law," Bell said to Virginia outlet The Daily Press. "That's it. I don't care about public opinion ... my focus will be on what the officers can do and cannot do -- what is legal and what is not legal."

He said he does not have a timeline yet for an announcement in the case.

Isle of Wight Commonwealth's Attorney Georgette Phillips, whose office prosecutes cases in Windsor, recused herself because her office had worked with one of the officers, according to Hampton ABC affiliate WVEC.

The incident sparked outrage after body camera footage was released in April by the town of Windsor.

Nazario was pulled over for not having a rear license plate. He was driving a newly purchased Chevrolet Tahoe SUV and had his cardboard temporary plates taped inside the rear window of the vehicle, according to a lawsuit filed against the officers in April.

After news of the case broke, Virginia Gov. Ralph Northam called the incident "disturbing" and directed the Virginia State Police to conduct an independent investigation in April.

Gutierrez was fired in April but Crocker remains on the force.

As for the federal civil rights lawsuit against the two officers, Nazario's attorney in the case, Jonathan Arthur, told ABC News the case is moving through the court system.

"Defense counsel has made their appearance and have filed their first round of defensive pleadings, asking the court to stay litigation until the end of the criminal investigations and asking the court to dismiss the first amendment claim.My client has objected and we will see how the court rules," Arthur said.

The lawsuit claims the officers violated Nazario's constitutional rights and used force despite not having any probable cause that Nazario had committed a crime. Nazario was not charged in the incident. The suit seeks compensatory and punitive damages.

Gutierrez wrote in his police report that he felt he had to choose between charging Nazario with obstruction or releasing him without any charges.

"I made the decision to release him without any charges," he said in the report. "The reason for this decision is simple; the military is the only place where double jeopardy applies. Meaning that whatever happened in civil court, the military could still take action against him. Being a military veteran, I did not want to see his career ruined over one erroneous decision."

In responsive documents to the lawsuit, Crocker denied that any license plate was visible on Nazario's vehicle and denied that his conduct was improper. He also admitted that Nazario was hit with pepper spray in the incident. Gutierrez denied using unreasonable force in the incident.