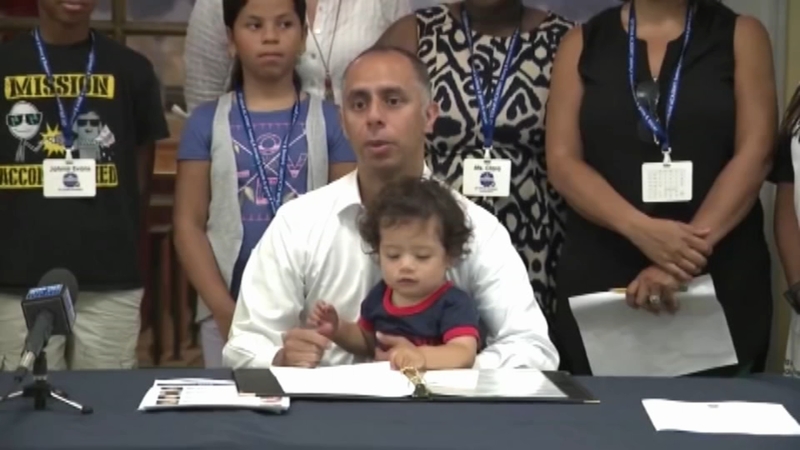 PROVIDENCE, R.I. (AP) -- Providence Mayor Jorge Elorza has not been shy about bringing his baby to work, and in doing so has ignited a debate about the role of children in the workplace and cast a spotlight on the struggles of balancing a career and child care.

To some, Elorza's workday appearances with 1-year-old Omar set an example for how to juggle jobs and parenting at a time when many people are working long hours away from their children and paying skyrocketing costs for day care. His detractors say Elorza is using the child as a prop and benefiting from a double standard that would make it impossible for a working mother to do what the mayor is doing.

"I do think that if a female elected official was doing the same thing, the amount of pushback that we would be getting would be huge," said City Council President Sabina Matos, a fellow Democrat and mom with two school-aged children, adding: "People would say that we're not capable of doing both jobs."

Elorza has incorporated child care into his job in a way rarely seen in the American public sphere.

His tenure as mayor of Rhode Island's largest city comes amid a growing movement to let parents bring their babies to work as an alternative to leaving infants at day care for long stretches while they're still nursing. At least 250 employers have baby programs, including government offices in more than half a dozen states such as Arizona , Washington and Vermont , according to the Parenting in the Workplace Institute, which helps develop and track baby-friendly policies. California is considering a similar policy for state workers.

In an interview with The Associated Press, Elorza said bringing his child to work was a decision that he and his wife, Stephanie Gonzalez, made after assessing their busy, unpredictable schedules. He wants time with his son.

The mayor confirmed he had been home with the baby on Wednesdays but that now that his son is older and more mobile, working has become more difficult. Now, he spends one morning a week with Omar before handing him off to the boy's grandmother.

The decision has put Elorza in the hot seat. The head of the teachers union - who is frequently at odds with the mayor - went after him on Twitter, pointing out that teachers don't get the same opportunity.

Critics also have accused the mayor of being unprofessional and sometimes even inappropriate. It happened when Elorza testified about legislation to strengthen the right to an abortion while holding Omar in his lap. And again, when he brought Omar to a news conference about a shooting and the boy made goo goo noises and a fuss as the public safety commissioner spoke.