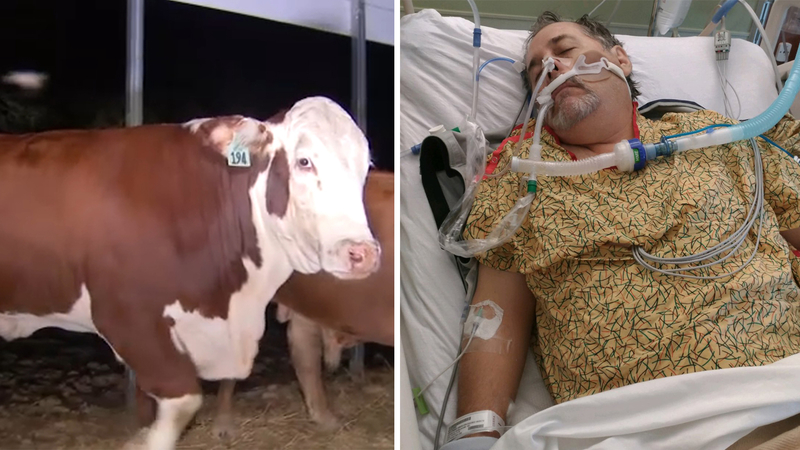 ALVIN, Texas -- Many people think of cows as sweet creatures, but one man says a bovine nearly killed him.

Greg Nolen says the only reason he's alive is that a friend took on the crazed creature.

"She can be a little bit psychotic," said Nolen.

He continues to take care of his cow Bellvia despite of her almost killing him last month. He says her aggressive behavior started after giving birth to her calf.

In one attack, she cornered Nolen and headbutted him, but nine weeks ago, she got even more vicious.

"When she got me down, she broke all my ribs on this side of my body except for one," said Nolen. "She basically punctured my ribs, punctured my lungs and destroyed my spleen."

Greg has been viciously attacked by his cow 2 times. 9 weeks ago she almost ended his life. Tonight when asked why he still cares for her he tells me he just can’t give her up... but has a lesson he wants to share with others on how to protect themselves ....story at 10 #Abc13 pic.twitter.com/YopZ7iSmgF

Nolen says he thanks God for his renter Sabrina. As the cow kept headbutting Nolen, she hit the cow in the head.

He spent two and a half weeks in the hospital, initially in ICU.

"She's a registered Braford and I've invested a good amount of money in her to buy her for my granddaughter and registered animals are of a higher quality," he said.

Bellvia was used in the past for stock shows when she was a heifer. Now, he says she'll only be used to create offspring. Her calves will be raised for stock shows.