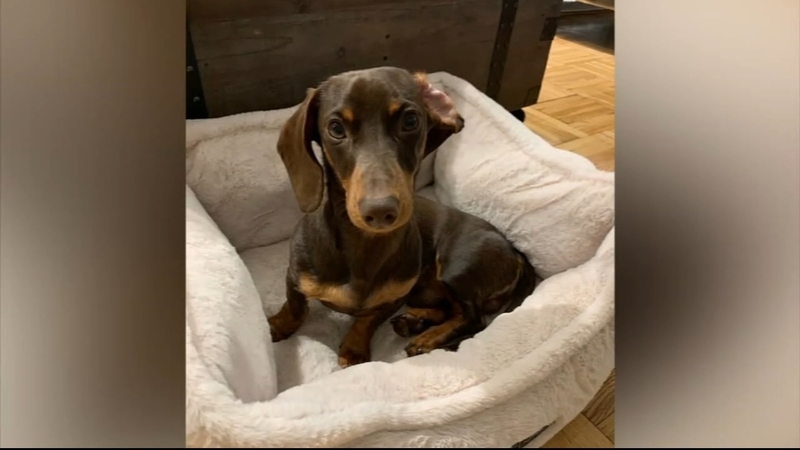 PHILADELPHIA (WPVI) -- Moksha is back home!

The 10-month-old Dachshund puppy has been reunited with his owner after he was stolen from a parked RV outside a Philadelphia hotel last Thursday afternoon.

Action News is told Moksha was found thanks to an anonymous tip.

#UPDATE: Moksha has been FOUND! Via anonymous tip, Moksha was reunited with his owner Fatima ❤️ @6abc https://t.co/1HnLRP7sJD pic.twitter.com/iGL6po0FjA

Fatima Gul was leading a human rights walk. She had parked her RV in the parking lot of the Holiday Inn Express Philadelphia Penns Landing and was only gone for an hour.

When she returned to her RV, she discovered someone had broken into her vehicle. Everything was flipped upside down inside the RV, she said.

"They have taken the whole locks out of the front doors, very professionally, no scratch, nothing left. No evidence on the floor," Gul told Action News last week. "They just did it like that."

STOLEN PUPPY: Moksha’s owner says he was stolen on Thursday from an RV parked in the Holiday Inn Express Penns Landing parking lot. She says she’s desperate to have him back and is not looking to press charges @6abc pic.twitter.com/0Fbmh769js

Gul said her heart dropped when she saw her dog was gone.

"Please understand my pain," said Gul. "He was not just a puppy, so I can't go ahead and find another puppy, it's not like that. It's my Moksha and it's my one and only."

An employee with the Holiday Inn Express Penns Landing insisted there were no outside surveillance cameras, and that there were multiple signs posted in the parking lot warning guests the hotel is not responsible for theft.

Gul said she stopped her human rights walk, which spanned from New York to Washington D.C., in order to post flyers in Philadelphia and find her puppy.

"It's so painful," said Gul. "I'm just running around and I just want to see him. I cannot sleep. I have not been able to sleep much. There's so much pain inside me."

No further information has been released concerning Moksha's return.