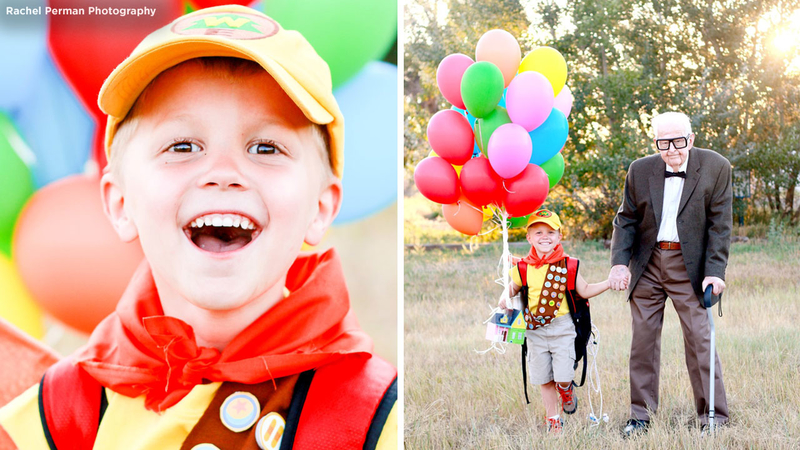 This boy's "Up" photo shoot with his great grandparents will fill the pages of their family's adventure book for years to come.

Rachel Perman, a photographer and mother of three, decided to do "magical shoots" for her children, who share the same birthday week. It was the perfect time to put her son's obsession with "Up" on full display.

"He specifically loves the house and the balloons and the colorful details," Perman told ABC News of her son Elijah, who is "borderline addicted to 'Up.'"

"It's the only thing he draws and colors, the house with balloons, and the only books he wants to get at the library, and the only toy he wanted when we were in Disney World last year," Perman said of her 5-year-old son. "He loves 'Up,' so inviting his great grandparents was my idea and a surprise to him. He loved that they dressed up."

She and Elijah cut out cereal boxes one day and hand-painted them to create the prop for the house attached to the colorful balloon bouquet.

On Monday, the Colorado family got together and pulled off the session in just 30 minutes.

Richard and Caroline Bain, Perman's grandparents -- who both turn 90 this year -- "were thrilled to participate" as Carl and Ellie from the beloved 2009 Disney/Pixar film.

"Grandpa even went to the thrift store to get the jacket," she added.

Richard Bain saw a photo of his character Carl ahead of time, even though he nor his wife have ever seen the movie.

Perman had a sentimental reason for marking the twins' 5th birthday with such thoughtful photo shoots.

"For their 5th birthday I wanted to celebrate the things they love with photos," Perman explained. "Five years ago, I was diagnosed with cancer right after my twins were born and I had fears if I would even get to see their 5th birthday."

Perman, who is now in remission, said her eldest daughter Mikayla was just 5 years old at the time and she "hated not knowing if I would get the same time with the twins that I got with her."

Earlier this week she also surprised her daughter Emilee, Elijah's twin sister who "loves all things girly and princess," with a horse had a unicorn horn.

"She loved it!" Perman said.

"The kids loved the shoots. They see me leave frequently to take other people's photos so they were excited to do something special," their mom said.

Now, she added, they're eagerly awaiting their big sister's upcoming 10th birthday photo shoot. The theme for that birthday bash has yet to be decided.

"I had no clue this would receive recognition! It's been fun to see how many people are touched by it! I keep telling the kids, 'You are good at bringing happiness to us. Now you are making the nation happy, too!'"

Plus, for Perman and her husband, the celebratory shoot gave them some additional peace of mind.

"I told my husband, 'I'm glad to know what's been driving us crazy for two years is finally paying off,'" Perman said laughing. "It was a great celebration for all of us."