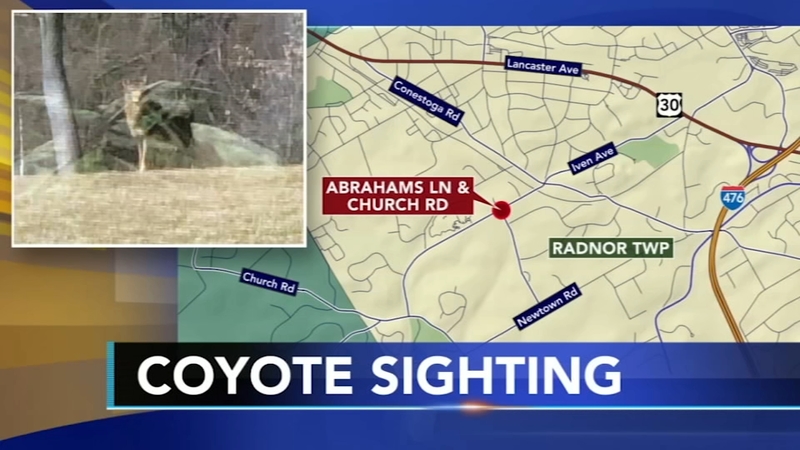 RADNOR, Pa. (WPVI) -- Authorities are on the Main Line are on alert after a coyote sighting.

"It is not going to come after people. It is probably more afraid of the people than the people are of him but I would be concerned about small pets. If you are going to let your dog go out, I would suggest you go with it," said William Gallagher with Radnor Township Animal Control.

"People are concerned. It is something different. It is not every day that you see a coyote wandering through your neighborhood," Gallagher said.

There have been several sightings of the animal over the last couple of days in the area of Abrahams Lane and Church Road. The township believes it's the same coyote.

"If you startled one, they tell you to maintain eye contact with it because if you turn and you run, it will trigger their prey mode and they could chase you," Gallagher adds.

Town officials say there are a lot of wooded areas, and this not the first wild animal sighting and probably won't be the last. Those living in the area tell Action News they are concerned about livestock and their small pets.

"He would not have a snowballs chance. It is 6 pounds, I am assuming. He would fly through here, pick up my dog and take him off, so that is a concern," said resident Kim Panichi.

Resident Candy Rittenhouse was alarmed when she saw the images of the coyote on the township's Twitter feed. She says she's not letting her dog out of her sight.

"I am not letting her out by herself and tonight. I will walk her on a leash, with a flashlight and maybe a little BB gun or something," said Rittenhouse.

"If it is hungry enough, it will take down a deer. I have seen a couple on the side of the road over the years, where it just look like Thanksgiving and there are nothing but bones there," Gallagher says.

Experts say you should never try to feed a coyote and again they stress, the main warning is for small animal and small children. If you see the coyote, you should call 9-1-1.

According to WildlifeHelp.org, "Coyotes rarely attack people, but as their numbers increase and they move into more urban areas, attacks on people are increasing.

More tips to protect yourself and your family: