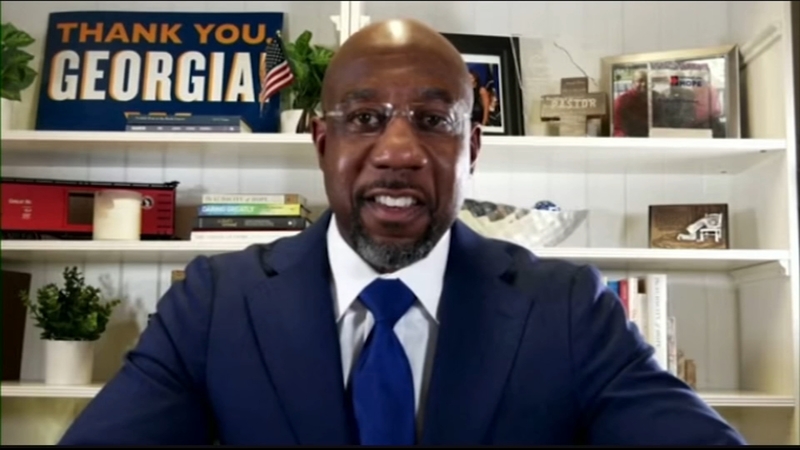 PHILADELPHIA (WPVI) -- Gregory Burrell, the owner of Terry Funeral Home in West Philadelphia, is in a Georgia state of mind.

"When I saw him over the first year or so I knew there was something about this guy that was special, and here we are today," Burrell said.

"I said, 'Listen, we are really, really proud of you.' And I said, 'Doc I have a good feeling about this election,'" Burell added.

Warnock follows in Dr. Martin Luther King's footsteps as both a Morehouse graduate and pastor of Ebenezer Baptist Church.

"To have him preach in the same church that Dr. King came out of its unreal. It's almost like you cannot make it up," Burrell said.

Warnock's historic win resonates in Philadelphia. He was a guest preacher at Enon Baptist Church and is a friend of Pastor Alyn Waller.

"We as the African American community in Philadelphia have the same ability to impact statewide politics and it should challenge us to do that very thing," Waller said.

But Waller reminds us this victory comes amid chaos directly speaking about the mob erupting in Washington.

"As much as we think the saints are rejoicing we see the aint's going crazy. This really is a symbol of what this moment is: America is changing for the better," Waller said.
Report a correction or typo
Related topics:
politicsphiladelphiasocietysenatepolitics
Copyright © 2021 WPVI-TV. All Rights Reserved.
TOP STORIES
Woman killed, boyfriend says gun accidentally fired: Police
Father, 2 daughters and niece killed in South Jersey crash
Recovered body matches description of missing woman: Police
Simone Biles to return for balance beam finals
Fauci warns 'things are going to get worse' with COVID
Wells Fargo Center hosting hiring event
AccuWeather: Sunny and nice today, thunderstorms later in the week
Show More
Enrollment opens for Philadelphia Virtual Academy
Man using ATM shot after refusing to give up cash: Police
MLK Drive reopening to vehicles this week: What you should know
Frustration as Biden, Congress allow eviction ban to expire
12 injured during incident at sports complex in Manheim, Pa.
More TOP STORIES News