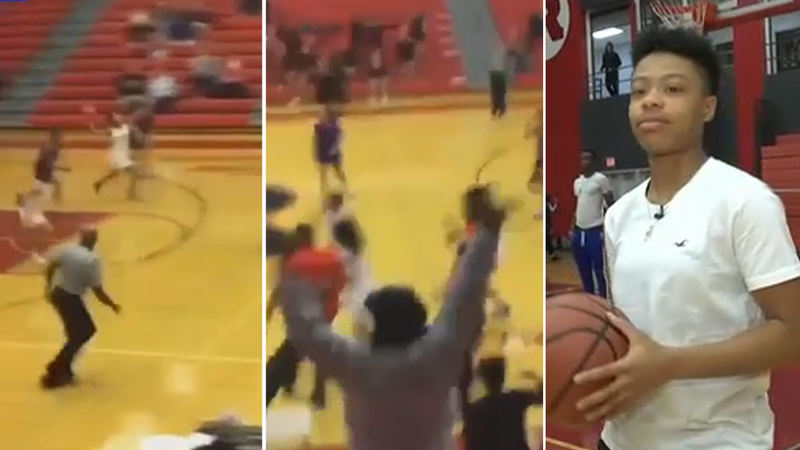 READING, Pennsylvania (WPVI) -- The Reading High School girl's basketball team was down by a bucket in the final seconds of a game at William Penn High School on December 28. The ball was on William Penn's side of the court.

"She shot the ball from right here," Katara Key, a senior on the Reading team said while pointing at the foul line. "I kind of snatched it from her, just took a dribble, and launched it."

The shot was probably about 65-feet-long. The 18-year-old launched it with one arm. It sank through the net, and the game went into overtime.

"When the ball actually went in the hoop, I just saw everybody jumping, people were running the steps, the band was just going crazy," Key explained.

The shot ended up being featured on SportsCenter's Top 10 Plays of the Day that weekend. The Reading Knights also won the game in overtime.

"There was just adrenaline after the shot, just kind of put in the bag after that," Key said.

For most people, it'd be written up as a lucky shot, Key said, however, there was no luck involved.

"I just saw the spiral and I was like yeah, that's going in. I practice that shot all the time with my coach," she said.
Report a correction or typo
Related topics:
sportsberks countyaction news sportscommunityphilly proud
Copyright © 2022 WPVI-TV. All Rights Reserved.
TOP STORIES
AccuWeather Alert: Drenching Downpours Tonight
Officials ID 5 killed in Pottstown explosion; most were children
Official admits police made 'wrong decision' in TX shooting
Victim of elementary school attack says it could have been prevented
Police: Store owner robbed, assaulted with brick in North Philly
Dann Cuellar retires after 34 years at Action News
Another Trenton, NJ firehouse hit by gunfire
Show More
Rainy start to Memorial Day weekend at the Jersey Shore
Bank employees help kidnapped woman after she asks for loan
Massacre survivor says gunman told them: 'You're all gonna die'
4th grader 'did what she had to to survive' Uvalde shooting, aunt says
North Penn holds farewell parade for retiring superintendent
More TOP STORIES News