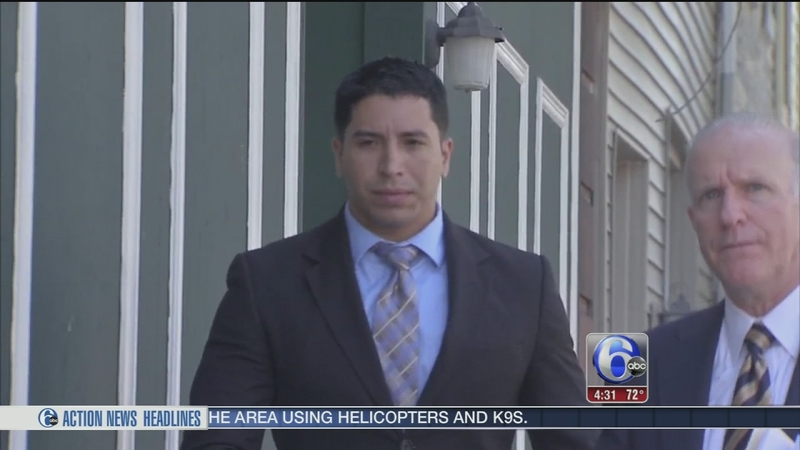 READING, Pa. (WPVI) -- A Reading, Pa. police officer lied about the reason behind a traffic stop, then smashed the motorist's cellphone and punched her in the face after pulling her over without sufficient cause, prosecutors said.

Officer Jesus Santiago-DeJesus, 27, turned himself in and was arraigned Thursday on charges that include official oppression and evidence tampering. He was charged a day earlier after the Berks County district attorney's office reviewed surveillance video of the early-April altercation.

Santiago-DeJesus declined to comment after his arraignment, but his lawyer, Allan Sodomsky, rejected the charges, saying the stop was good and the motorist had assaulted the officer first.

"He's very upset, and his family is very embarrassed, that he's even involved in any type of an allegation," Sodomsky said.

The officer claimed in a police report that he pulled over Marcelina Cintron-Garcia, 30, for failing to use a turn signal. Investigators later reviewed surveillance video that showed her right front turn signal was on, according to a police affidavit.

After the stop, an argument ensued, and Cintron-Garcia began recording the encounter with her cellphone. Surveillance video played by authorities at a news conference Tuesday appeared to show a struggle between her and Santiago-DeJesus over the phone.

After the officer smashed the phone onto the sidewalk, she struck him with her left hand, and he punched her in the face and threw her down, court papers said. Her head struck a pipe, opening a gash that required three staples.

Prosecutors said the officer's false claim that she did not use a turn signal prompted another officer to wrongly charge her with a traffic violation.

That charge, and other charges against Cintron-Garcia that included aggravated assault, were withdrawn after she filed a complaint and prosecutors launched an investigation.

Charges against her boyfriend, who was with her, also were dropped.

"The integrity of the criminal justice system is in jeopardy when a police officer fabricates information," District Attorney John T. Adams said Tuesday at a news conference announcing the charges.

Adams said the officer had knocked the phone out of the woman's hand to destroy the video she was recording.

But Sodomsky, the defense attorney, said Santiago-DeJesus merely wanted to get Cintron-Garcia's phone away from her so she couldn't use it as a weapon.

The video played by prosecutors does not tell the whole story, he added.

"What's the view from behind the car, the view the officer had? That's the issue as to why the vehicle was pulled over," he said. "We only see the little clip that was released by the government. We see the front of the car. That's not the issue. What did the officer see from behind?"

It's not the first time that Santiago-DeJesus's actions have been scrutinized. The four-year police veteran was recently suspended for a day after he became upset when a citizen recorded an encounter with Santiago-DeJesus.