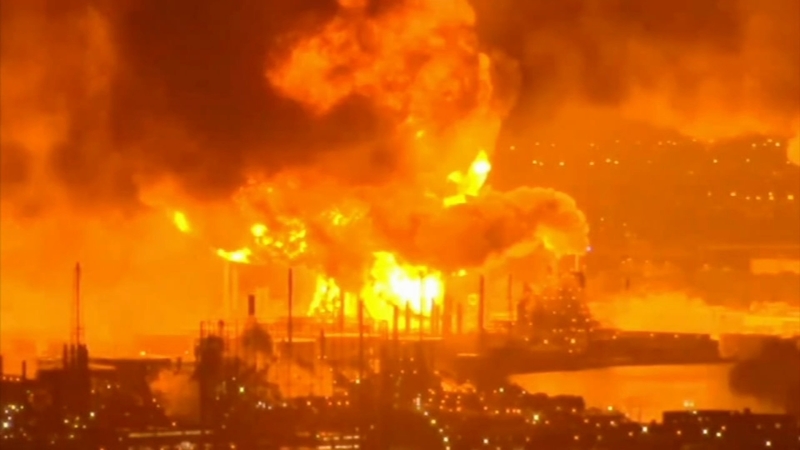 PHILADELPHIA -- The owner of the largest oil refinery complex on the East Coast is telling officials that it will close the facility after a fire last week set off explosions and damaged equipment there.

Philadelphia Mayor Jim Kenney said in a statement Wednesday that Philadelphia Energy Solutions had informed him of its decision to shut down the facility in the next month. The more than 1,000 workers there will be impacted, the mayor said.

"The City is committed to supporting them during this difficult time in any way possible. We will immediately convene a group of City and quasi-governmental organizations to discuss the economic and employment impacts, and what the City is able to do in response," the mayor said.

It's unclear whether the closure might have any effect on oil prices.

"Today, Philadelphia Energy Solutions made the difficult decision to commence shutdown of the refining complex. While our teams include some of the most talented people in the industry, the recent fire at the refinery complex has made it impossible for us to continue operations. We are grateful that the fire resulted in only a few minor injuries. I want to thank our employees for their hard work and dedication and to thank the Philadelphia community for their support. We are committed to an orderly process to safely wind down our operations. As part of the winddown, the company will position the refinery complex for a sale and restart."

Ryan O'Callaghan, the President representing United Steelworkers District 10, Local 1 said this impacts more than 600 hundred union members and that doesn't include the refinery's salaried employees and surrounding businesses. O'Callaghan tells Action News he received a call from PES officials at six in the morning Wednesday requesting he, along with union employees meet at noon for a meeting on the grounds of the refinery. Few details were released to him prior to the meeting.

The 150-year-old oil refining complex processes 335,000 barrels of crude oil daily, according to PES. The refinery turns the crude into gasoline, jet fuel, propane, home heating oil, and other products.

It started as a bulk petroleum storage facility in 1866 and began refinery operations in 1870.
The company emerged from federal bankruptcy court last year after restructuring its debt, leaving its majority ownership in the hands of investment banking firms Credit Suisse Asset Management and Bardin Hill.

Friday's fire at the complex broke out early in the morning, and video showed the enormous orange blast bursting into the sky.

It set off three explosions, felt miles away, as the fire plowed through a tangle of pipes carrying fuel across the complex, the company has said. It happened at the Girard Point refinery, one of two at the PES complex in south Philadelphia.

The fire erupted in a tank containing a mix of butane and propane, a fire official said.