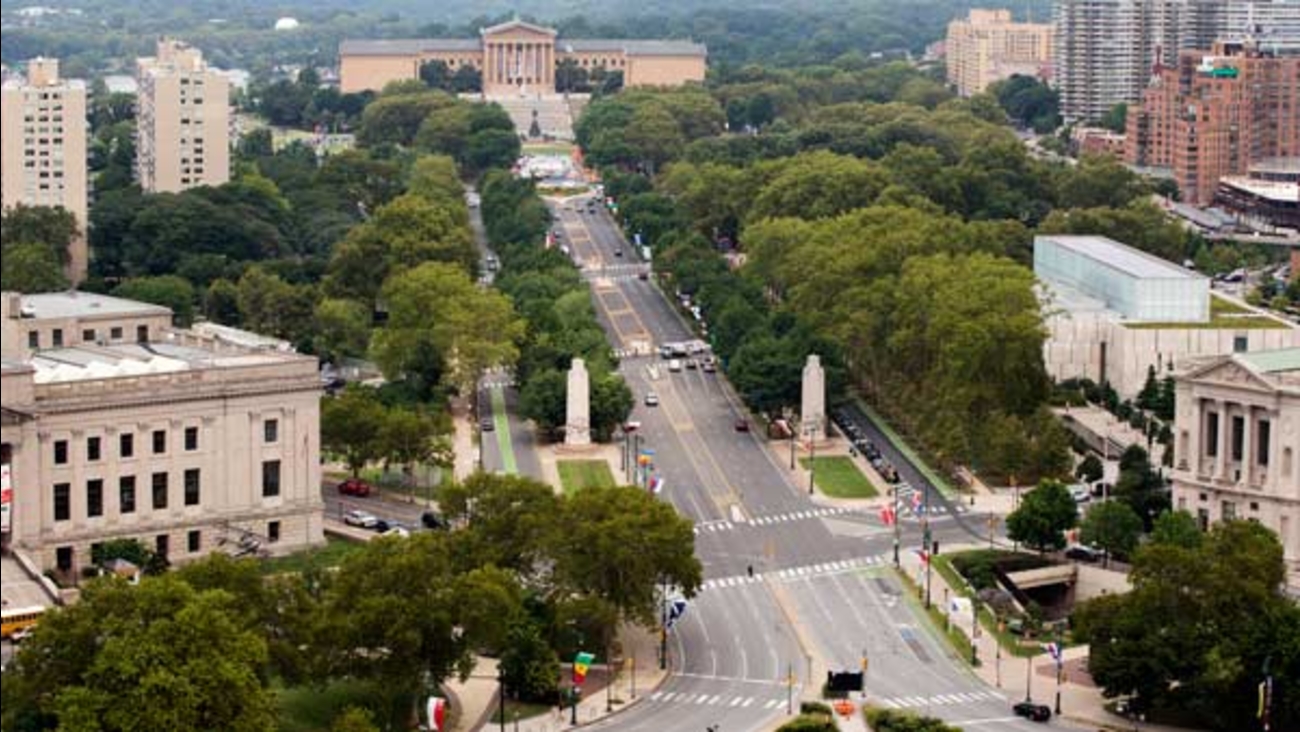 FILE - In this July 30, 2015, file photo, viewed from the Embassy Suites hotel, traffic moves along the Benjamin Franklin Parkway leading to the Philadelphia Museum of Art. (AP Photo/Matt Rourke, File)

PHILADELPHIA -- Philadelphia's mayor jokes that Pope Francis has personally guaranteed perfect weather for his visit next week, yet emergency planners still have to be prepared in case Mother Nature has other ideas.

A sudden thunderstorm moving in on one of Francis' events on the spacious, tree-lined Benjamin Franklin Parkway could put a projected crowd of a million people or more in the path of potentially deadly lightning and dangerous winds.

It's a risk that's inherent to the final leg of Francis' six-day, three-city U.S. tour. His major events in Washington and New York are indoors, save for a Popemobile ride through Central Park in front of about 80,000 people. In Philadelphia, all of the pope's big public events are outside - and they're expected to draw massive crowds.

Organizers anticipate about 500,000 people for a festival and concert featuring Francis on Sept. 26 and more than a million people at his Mass on Sept. 27. About 40,000 people are expected for the pope's Sept. 26 speech on immigration and religious freedom at Independence Mall.

The events are rain or shine, but lightning would trigger evacuations.

The National Weather Service will provide real-time weather monitoring to the city's emergency operations center. If they detect trouble, officials will send an alert via text message to people signed up for them and broadcast instructions on the video boards lining the parkway, the city's emergency management director Samantha Phillips said.

Next comes the challenge of getting people to safety.

Officials will direct people to nearby parking garages because of their ease of access. They also will encourage people to seek cover on their own at hotels, restaurants and other closed spaces.

"The amount of time needed to get that many people to move to a safe place in some sort of orderly fashion means you'd have to get the word out well in advance," Penn State meteorology professor Jon Nese said. "You have to have a plan in place, but implementing it could be a logistical nightmare."

Philadelphia's plan is based in part on Washington, D.C.'s evacuation plan, "Safe Haven," and the city's experience in evacuating the Benjamin Franklin Parkway during the Made in America music festival on Labor Day weekend in 2014, when there was torrential rain, thunder and lightning.

Washington's "Safe Haven" plan, activated most recently for thunderstorms on July 4, utilizes public spaces along the National Mall as shelters. They include museums and government and private offices.

"A mantra that all great planners have is plan for the worst and hope for the best," said U.S. Park Police Chief Robert MacLean. "When we sit down with our planners, we never take for granted that it's just another July 4."

Some buildings near the papal events that would otherwise be used as shelters, like museums and a commuter rail station, will be closed and unavailable, Phillips said.

Most of the shelter locations for the papal visit are outside the security perimeter, meaning people who evacuate must go through metal detectors before re-entering the parkway, she said.

Emergency management officials, mindful of the August arrival of Hurricane Irene and Superstorm Sandy in late October, also are monitoring potential tropical activity. A tropical depression in the Atlantic is expected to dissipate.

"There is nothing brewing that we're keeping our eye on," Phillips said, "but we would huddle around that really closely and it's just something we would have to discuss within 72 hours of the event."

The Archdiocese of Philadelphia would not say what, if any, contingencies are in place if a potential tropical storm disrupts Francis' visit.

If history and the extended forecast are guides, it won't matter.

The average temperature in Philadelphia for the papal weekend is a high of 71 degrees and a low of 51. Forecasters call for temperatures in the low to mid-70s with a shower possible on Sept. 26 and overcast skies on Sept. 27.

All in all, thunderstorms are rare in Philadelphia in September.

Over the last 65 years, they have been reported about 1.4 percent of the time, according to the state climatologist's office.

"It would be very, very unlucky if a thunderstorm intersected with the pope while all those people were standing outside," Nese said.

But, Phillips said, it's better to be prepared.

"I hope for sunshine, too," she said.