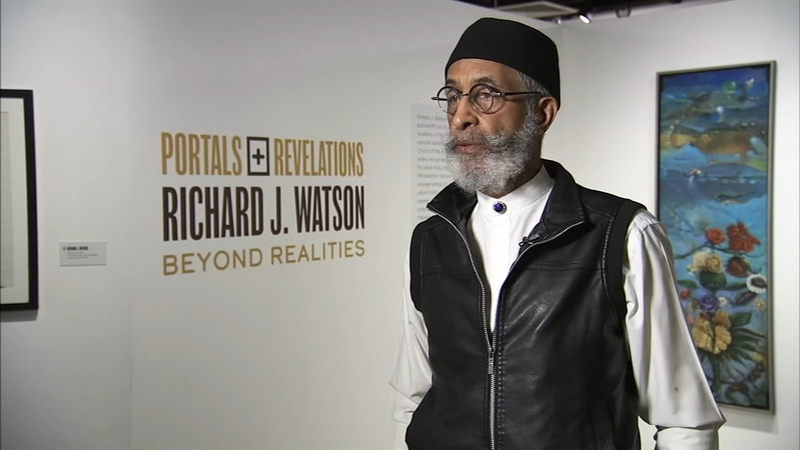 PHILADELPHIA (WPVI) -- As we celebrate Black History Month, we're taking you to the African American Museum in Philadelphia, where the works of an icon and civil rights crusader are on display. Karen Rogers has the story in this week's 6abc Loves the Arts.

Portals and Revelations: Richard J. Watson Beyond Realities is the creative evolution of the museum's Artist-in-Residence.

"It's a continuum, from my past and some of my exposures to contemporary issues, social and political and personal," says Richard J. Watson, who's also the Exhibition's Manager.

Watson's civil rights activism is prevalent in his work.

"He was very, very active in the 1960s and 70s and beyond, desegregating Girard college," says Duckett.

"Have a living legend on staff and in the city," says Ivan Henderson, VP of Programming at the Museum.

Watson received his formal training from the Pennsylvania Academy of the Fine Arts.

"There are objects that are embedded within many of my works," says Watson.

"Where you'll have some newspaper clips and maybe a candy wrapper and a clock frame and a handle from a door. You began to see a narrative unfold," Henderson says.

"It's very hard to throw away anything here because Richard will snatch it up," says Duckett.

Much of his work documents his youth in North Carolina after the death of his mother.

"My ancestral references are about people, women in my life who have supported me as a young boy," says Watson.

He uses old computer screens as a canvas to re-create the southern landscapes he remembers.

"It gives it that fantastical feel," says Duckett.

And he says civil rights leaders have greatly influenced his work.

"The historical references that I make definitely deal with the African American experience, the kinds of challenges we faced," says Watson.

"Because these stories are often left out of the narrative," says Duckett.

Portals and Revelations is on display through March 6th.