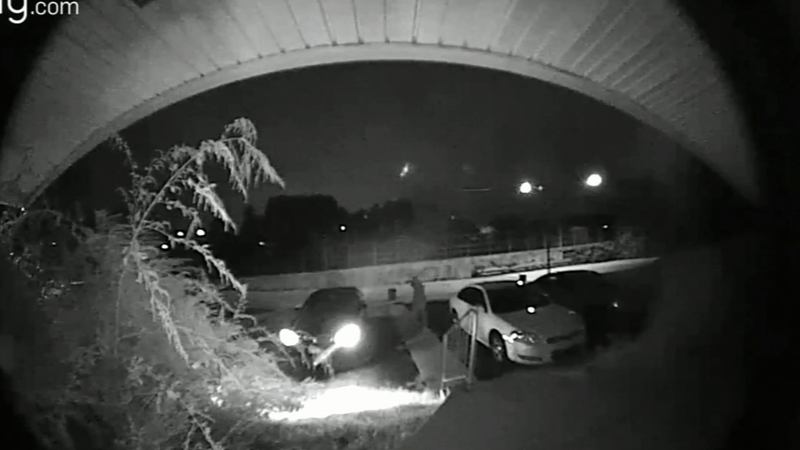 RIDLEY TOWNSHIP, Pennsylvania (WPVI) -- A convicted murderer who spent 24 years in prison is accused of an armed carjacking in the Woodlyn section of Ridley Township, Pennsylvania.

Authorities say 44-year-old Donald Flynn was paroled in August. He is now once again in custody.

Ridley Township detectives say Flynn was recorded on a doorbell camera in the 200 block of Elmwood Avenue attempting to carjack a woman driving a black BMW.

In the footage, you can see a man lurking off to the right of the screen.

"Waiting, unbeknownst to (the victims) was this guy with a gun to take their vehicle," said Willoughby.

The driver said the man put a gun up to her head and told her to get out. In a panic, she accidentally puts the car in reverse.

"She's screaming. He's screaming at her," said Willoughby. "And she panics and tries to put the car in park, at which time she puts the car in reverse."

In the video you can hear the suspect yell for the woman to "put it in park."

The car then backs into a concrete wall. The driver and her passenger jump out of the car and run into the house.

At that point, a suspect is seen entering the car and speeding off.

Police say after the initial 911 call, dispatch received a second call alerting them of a car on fire.

The burning car stopped right outside Joe DeLuca's house, so he grabbed a hose.

"Cops said 'You want to keep back' so that's when I got behind a tree because I heard some popping and some bullets and there might have been a gun in the car," said DeLuca.

Authorities say once they got to the car they were told by a witness she saw a man take off running.

When officers later encountered Flynn he had burns to his neck, wrist, and knuckles.

The woman who witnessed him running from the burning car was brought over to Flynn to make an identification.

"They had him sitting down in handcuffs and they ripped open his pants. His skin was burnt and he was saying it was from his cellphone blowing up," said the witness.

"The vehicle caught on fire probably because of the accident when it hit the retaining wall or when he went over the high curb," said Willoughby.

Flynn was evaluated by medics on the scene and subsequently transported to the burn unit of Crozer Chester Medical Center for treatment.

Flynn faces six charges in connection with the incident, including robbery of a motor vehicle, recklessly endangering another person, terroristic threats and other related offenses.

"He's an extremely violent and dangerous person," said Willoughby. "And after he was released from prison he went right back to the life of crime that got him into prison 24 years ago."

Willoughby said the victims are shaken up but otherwise OK.