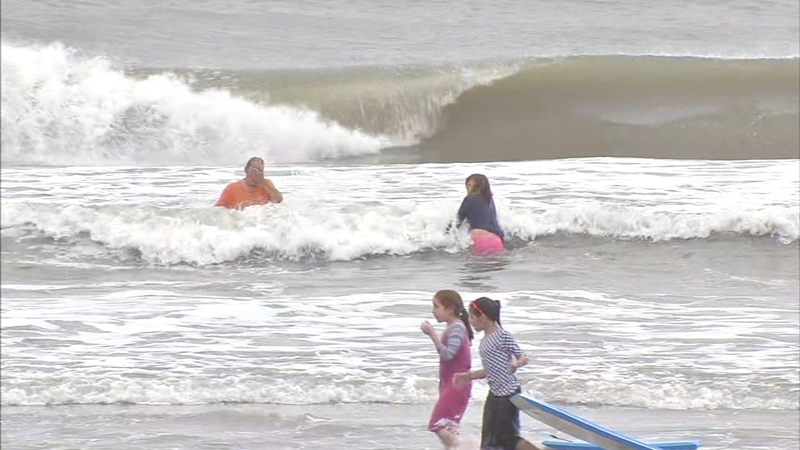 VENTNOR, New Jersey (WPVI) -- Tropical activity in the Atlantic is stirring up some rough surf, and beach patrols at the Jersey shore are preparing for a busy Labor Day weekend.

In Ocean City, people splashed in the waves as lifeguards diligently kept people in between the flags, and parents kept a watchful eye.

"The waves are just crashing on our children," said Jeanine Ziesso of Staten Island, New York. "But luckily they're swimming pretty good, we're just making sure they're safe and staying in between the green flags."

Lifeguards say conditions have calmed over the last few days, but as Tropical Storm Erin passes by the Jersey shore, there's a possibility for rough surf and strong rip currents into Thursday, according to Accuweather.

"Just realize the ocean is dangerous. So you gotta respect it and ask the lifeguards," said Ventnor Beach Patrol lifeguard Matt Spiers.

Ventnor officials also are keeping an eye on areas prone to tidal flooding, including near the Dorset Avenue Bridge.

"We have people who get stuck on one side or the other because of flooding of the roadway. We're unable to let cars pass," said Donna Peterson, Emergency Management Coordinator for Ventnor City.

Late August is prime time for rough surf and high winds and officials say now is the time to prepare for emergencies.

"From now until October, give or take, is really our season when we start gearing up for the heavier things that could happen," said Peterson.

A hurricane preparedness meeting is being held Wednesday night from 6:30-8:00 p.m. at St. James Memorial Hall in Ventnor.