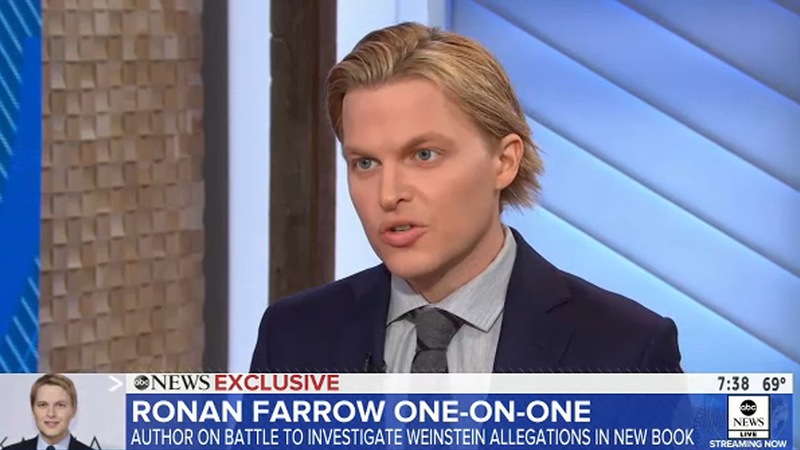 NEW YORK -- Ronan Farrow appeared on "GMA" to talk about his new book "Catch and Kill" and the allegations inside.

When asked by George Stephanopoulos if he interviewed Lauer for the book Farrow said, "I can say that Matt Lauer's thinking is presented in the book."

He went on to say that the claims were extensively fact checked.

"I'm confident in the reporting in the book," Farrow said.

He says that they were very careful in how they report Lauer's alleged interaction with Brooke Nevils.

"She unambiguously described a rape or sexual assault like many trauma victims, she was not ready to use those words, so her attorney did what is done very often in criminal investigations, where someone complains at a company," Farrow said. "It's a clear series of questions that elicited answers that without any doubt said that this is non-consensual."

She says that Lauer raped her while they were covering the Sochi Olympics in 2014.

Lauer released a lengthy letter on Wednesday in response to the allegations calling this account "categorically false."

NBC Chairman Andrew Lack, in a memo sent to network staff on Wednesday, said the network hadn't known of Lauer's behavior with Nevils until the day before he was fired. An internal investigation uncovered no claims or settlements associated with allegations of inappropriate conduct by Lauer before he was fired, Lack said.

But Farrow indicated that Lauer's behavior was an open secret at NBC. He quoted Lauer's former co-anchor Ann Curry - who left "Today" on bad terms with Lauer - saying she had told NBC executives that Lauer "had a problem with women" and they had to keep an eye on him.

Farrow said he'd learned of seven claims of sexual misconduct raised by women who worked with Lauer. "Several said they had told colleagues, and believed the network knew about the problem," he wrote.
EMBED More News Videos

"Catch and Kill" also covers the allegations made against movie mogul Harvey Weinstein and his claims that NBC stopped him from reporting on it.

"The point is they ordered a hard stop to the reporting, they told me and a producer working on this that we should not take a single call and they told us to cancel interviews," Farrow said.

He said he questioned why and he thinks the book answers that question.