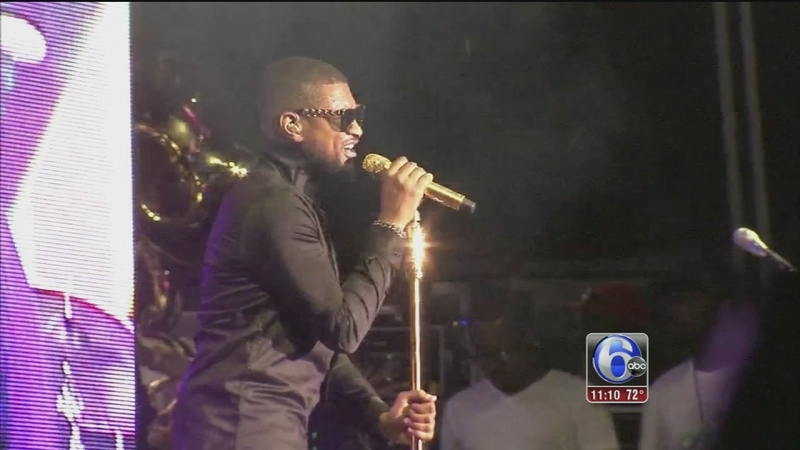 PENN'S LANDING (WPVI) -- The 9th annual Roots Picnic kicked off Saturday morning and continued into the night at the Festival Pier at Penn's Landing.

A number of popular musical acts performed at the festival including, of course, the Roots.

As many as 10,000 people enjoyed the sights and sounds coming from across the mid-Atlantic region.

"It's awesome, I mean we came up from Baltimore and were just here to enjoy the sites," said Orillio Avelleyra of Baltimore, Maryland. "It's a lot of mix of everything, nice DJ music, awesome classic rock, some good rap, too.

"I'm feeling really nice. I'm enjoying the nice weather, and all the little atmosphere that they have going on out here at The Roots program," said Latika Padgett of Southwest Philadelphia. "It's really nice."

"That's why we call it a picnic. It's supposed to be about friends and family. It's not just The Roots festival," said Rachel Spivak, event publicist. "It's all about the laid-back atmosphere at Festival Pier."

Usher and The Roots were among the 24 musical acts performing on three stages along the waterfront.

"We missed DMX so now we have to wait for Usher," said Padgett.

"And of course The Roots cause they're home bound," said Yvonne Johnson of South Philadelphia.

"Lil Dicky was good. We got some good food," said Brendan Callahan of Lewis, Delaware. "We're having a blast."

"Beautiful night. It look like the whole city out here," said Ron Brown of North Philadelphia. "If you ain't here, you missing out."