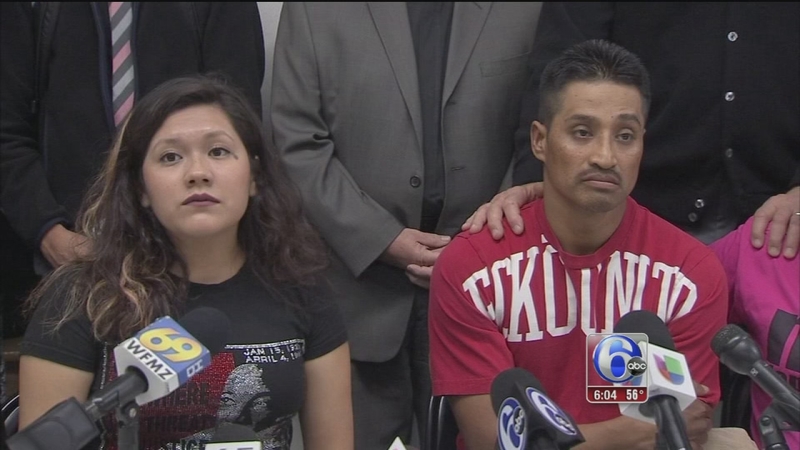 CENTER CITY (WPVI) -- The issue of undocumented immigrants and deportation became a central issue in the presidential campaign, and, on Tuesday, we met a human face to the topic at a sanctuary church in Center City Philadelphia.

Javier Flores, a father of three, held back tears as he explained why he will continue to accept sanctuary inside the Arch Street United Methodist Church.

He came to the church Sunday because he was due to be deported back to Mexico the next day.

Flores, an undocumented immigrant, has been deported before and returned, endured 15 months in jail, and now he believes Immigration and Customs Enforcement agents are coming to get him again as he waits for his new visa application to be processed.

"He's going to stay here, regardless of the times that he gets deported, he's always going to fight back and come back for his family," Javier's interpreter said.

A host of activists and congregations have coalesced to protect the 40-year-old native of Mexico City who came here in 1997 and started a family.
"Javier is a courageously, dedicated parent willing to risk everything to keep his family together," Reverend Robin Hynicka, United Methodist's pastor, said.

Hynicka says Flores is welcome to stay there as long as he wants or needs to.


ICE intends to adhere to existing guidance to avoid the apprehension of individuals at sensitive locations such as schools, hospitals, and places of worship, except in emergency circumstances.

Flores, in fact, helped Bensalem police convict two suspects who knifed him during a robbery and, his advocates say, therefore qualifies to remain in America.