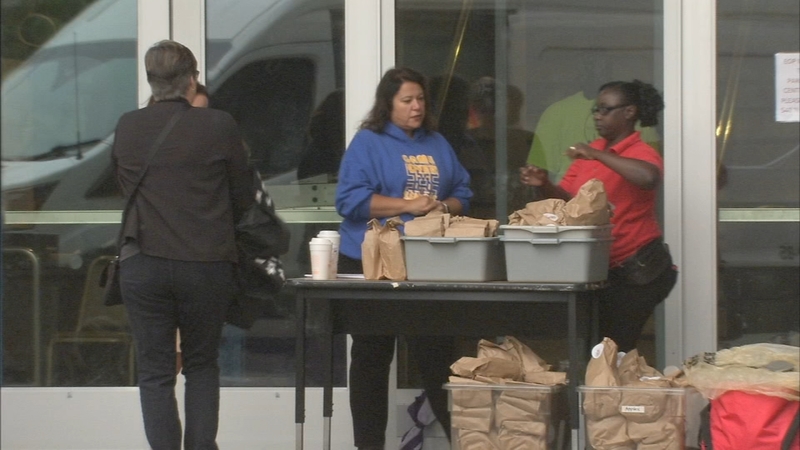 PHILADELPHIA (WPVI) -- Two Philadelphia schools will be closed until at least next week due to the presence of asbestos.

Officials say Benjamin Franklin High School and Science Leadership Academy, which share a campus in Spring Garden, will be closed for the remainder of the week.

Students can come to campus on Thursday and Friday for a free bagged breakfast and lunch.

"A student has showed up two days in a row in order to receive breakfast and didn't have breakfast," said Franklin teacher Elena Vasilatos.

"I'm here...to make sure if my students show up they can get Transpasses and they can get food," said SLA health teacher Pia Martin.

The School District of Philadelphia and the Philadelphia Federation of Teachers are meeting regularly to review the progress and determine the status of re-opening.

The issues were identified during recent environmental safety walkthroughs. Officials said there was damaged insulation material in the campus boiler room, and testing confirmed it contained asbestos.

"I've been here since the beginning of construction, which started last year, so we're all very, very upset by it," Vasilatos said.

"We're looking at a pattern of problems in the school district, in that health and safety gets swept under the rug. It takes news stories like this, to get a move on them," SLA teacher Daniel Symonds said.

This week's discovery comes in the wake of a $37 million construction project. The project was supposed to be completed in July, but that didn't happen.

The teacher has worked in district schools for 30 years.

"We have a colleague in another school who has contracted mesothelioma. There are students who don't need asbestos to know that their school is unsafe, that the water is undrinkable," Symonds said.