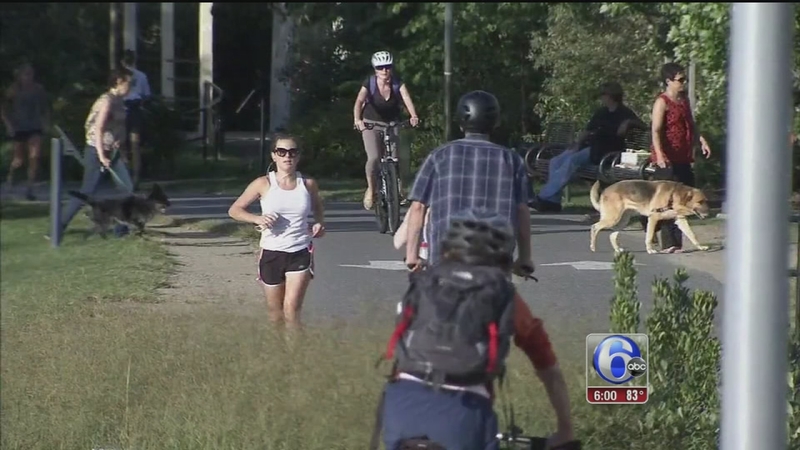 PHILADELPHIA (WPVI) -- Police are investigating reports of harassment on the Schuylkill River Trail after a witness made a Facebook post about an incident Wednesday.

On a page for joggers, the witness stated she saw five, young boys on bicycles surround a woman on the trail.

The witness stated the boys were harassing the woman and, at one point, the woman may have been slapped on the backside.

The post led to other joggers making reports, and police are now investigating.

Liz Brown, who works at Boat House Row, said she rides the trail every day, and has encountered the troublemakers.

"They'll do a wheelie straight at you, and try to force you off the trail," said Brown. "I usually ride pretty fast so they try to play chicken with me, and they end up swerving."

However, Brown and other women say they've never had a problem with sexual harassment.

"I don't go out really late. I always go out while it's light ... so I've never really had a problem," said Eileen Dwell of the Art Museum.

Joe Syrinck, who runs a local nonprofit, said he received emails Thursday about the incident.

"All we know is we got some emails today saying there were some adolescent boys on bicycles harassing women yesterday on the trail," said Syrinck.

A lieutenant in the 9th District tells Action News the alleged victim never called police, but officers are aware of the situation noting there have been similar incidents in the spring and summer.

Victims or witnesses are encouraged to call 911 and get a good description of the perpetrators.

"I don't think it's a terribly serious problem right now, but it's certainly not something we would want to get worse," said Syrinck. "I think if we can nip this in bud that would be the thing to do."