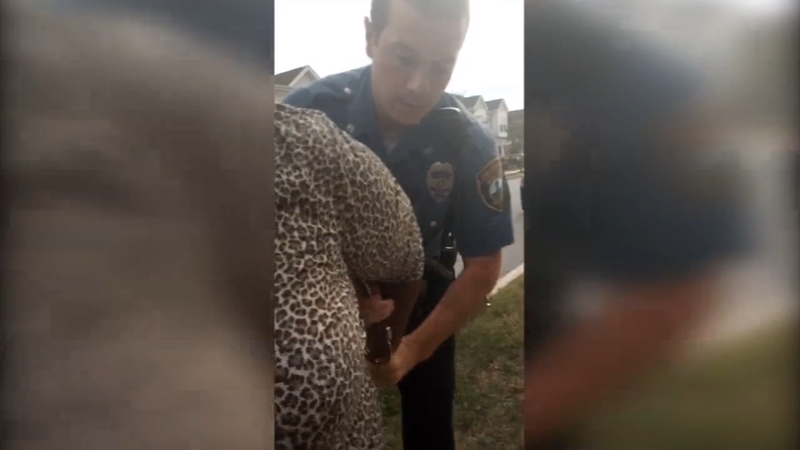 CHESTER TOWNSHIP, Pennsylvania (WPVI) -- Two families in Delaware County, Pennsylvania are calling for a group of police officers to be fired and the attorney general to investigate after family members were arrested for loitering in front of their homes.

Brandon Alvin said Chester Township police arrested him in front of his home on South Williams Circle on the night of September 21.

He said he did nothing wrong and should not have been approached.

The arrest was captured on grainy cell phone video where Alvin's wife, Danielle Alvin and a man can be heard yelling, "He lives here."

"You hear about it all the time, but to actually have it happen to a family member, my husband -- my kids were in the window," Danielle Alvin said.

Alvin said he was talking to his cousin, Don Roberts, when officers arrived and told him he was loitering, hanging in an area without a purpose.

"It's the same thing they been doing for the longest, they been harassing us," Roberts said.

According to the arrest affidavit, police saw Alvin leaning against an SUV and said he shouldn't be there. They tried to cuff and search him but he refused and said he did nothing wrong.

Police ended up pepper spraying Alvin twice while trying to take him into custody.

"I just want everyone to see how our community is being treated," said Danielle Alvin.

The same officer is accused of arresting members of the Briggs family down the street 10 days later, and on two different occasions; also in front of their homes.

That arrest was captured on video as well.

Both families now have the same attorneys who say they have more cases in the township and may file a class-action lawsuit.

They're now calling for the officers to be fired, and for the attorney general to investigate.

"This has been going on for years. It stops now," said attorney Thomas Fitzpatrick.

The attorneys argue that police are enforcing loitering laws that were struck down by judges back in 2012.

"We believe that they're using it as a way to harass and terrorize these black citizens in this community," said attorney Kevin Mincey.

The Chester Township police referred Action News to the Delaware County District Attorney Katayoun Copeland, who said they're reviewing one of the cases and that no one has come to them about the Alvin case.

Alvin's attorneys said the video has already been presented to prosecutors in court.

No civil complaints have been filed yet in either case.
Report a correction or typo
Related topics:
delaware countychester townshiparrest
Copyright © 2021 WPVI-TV. All Rights Reserved.
More Videos
From CNN Newsource affiliates
TOP STORIES