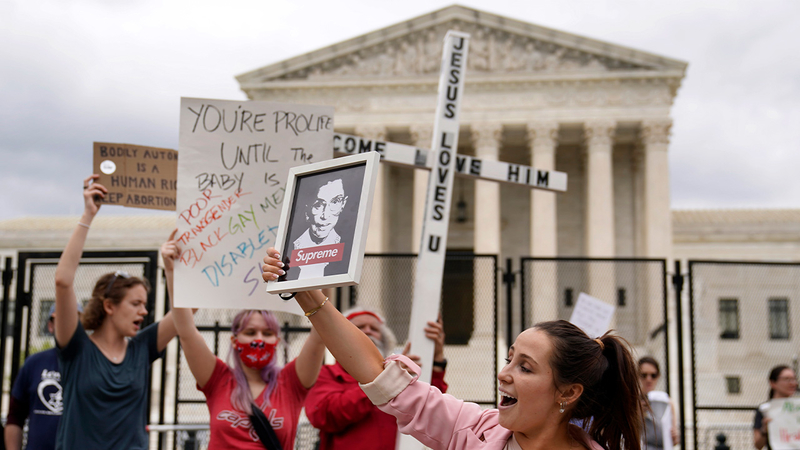 Democrats have pledged to take swift action on the issue after a leaked draft opinion showed the Supreme Court could overturn Roe v. Wade, the landmark decision legalizing abortion in the U.S. The draft is not the final ruling, though the court confirmed its authenticity.

"I intend to file cloture on this vital legislation on Monday which will set up a vote for Wednesday," Schumer, D-N.Y., said on the Senate floor.

Any effort to protect abortion access nationwide is likely to face an uphill battle in the 50-50 divided chamber, where Democrats don't have the 60 votes needed to overcome an expected filibuster.

The political fallout continues to grow after a leaked draft opinion indicates the Supreme Court is poised to overturn Roe v. Wade. Jim Dolan has the latest details.

The party has already experienced this problem with the Women's Health and Protection Act. The bill cleared the House of Representatives in September 2021, but in the Senate Schumer failed to get even the entire Democratic caucus on board when he tried to start debate on the bill back in February.

The legislation would codify Roe while also banning requirements some states have put into place related to abortion care, such as waiting periods and mandatory doctor's visits before the procedure.

Republicans have taken issue with how broad the Women's Health and Protection Act is, prompting Democrats to draft a modified version. Sen. Richard Blumenthal, D-Conn., changed some of the bill's language but it still may not be enough to sway the GOP members.

GOP Sen. Susan Collins of Maine told ABC News' Trish Turner that she would vote "no" on the proposal.

"My goal is to codify what is essentially existing law," Collins said. "That means Roe v. Wade, it means Casey v. Planned Parenthood, which established the undue burden test, and it means keeping the "conscience" protections which appear to be wiped out by the Democrats' version. So, I'm not trying to go beyond current law or, but rather to codify those Supreme Court decisions."
Collins is one of the Democratic Party's best chances of gaining a Republican vote on any potential bill. She and Sen. Lisa Murkowski of Alaska are the sole Senate Republicans who support abortion rights.

Women are sharing their abortion stories after a leaked Supreme Court draft opinion shows a majority of justices appear to have voted to effectively overturn Roe v. Wade.

Collins and Murkowski have their own proposal to codify Roe. Their bill -- dubbed the Reproductive Choice Act -- would prohibit states from imposing an "undue burden" on the ability of a woman to choose to terminate a pregnancy pre-viability but also allows states to keep other restrictions in place.

"This is a life or death moment and we need to fight," Sen. Kirsten Gillibrand, D-N.Y., told reporters.

Schumer said next week's vote is intended to put on the record exactly where lawmakers stand on abortion rights.

"You will hear plenty from us," Schumer said. "This is not just one vote and then this issue goes away. You will hear a lot from us through the next month all the way through November."
Report a correction or typo
Related topics:
politicsabortionsenatedemocratssupreme courtu.s. & worldu.s. supreme court
Copyright © 2022 ABC News Internet Ventures.
ABORTION
Abortion rights backers rally in anger over post-Roe future
Where do Pa. Senate candidates stand on abortion rights?
Philly students walk out of class to rally for abortion rights
5 myths about abortion and what the facts show
TOP STORIES
6 dead, 12 injured in Philadelphia weekend shootings
AccuWeather: Turning Cooler & Less Humid
Teen, officer and driver injured after police chase ends in crash
Masks required in Philly School District starting Monday
Texas woman sought in fatal shooting of pro cyclist: US Marshals
4 men stabbed in Tioga-Nicetown
Something strange is happening with our universe: NASA
Show More
Muncy's error allows Phillies to rally past Dodgers
Man shot, killed 'without provocation' on NYC subway: police
3 women wanted in assault, robbery on SEPTA train: Police
78,000 pounds of infant formula arrives in US
Fate of 2,500 Ukrainian POWs from steel plant stirs concern
More TOP STORIES News