SEPTA to reopen Somerset Station in Kensington on April 5 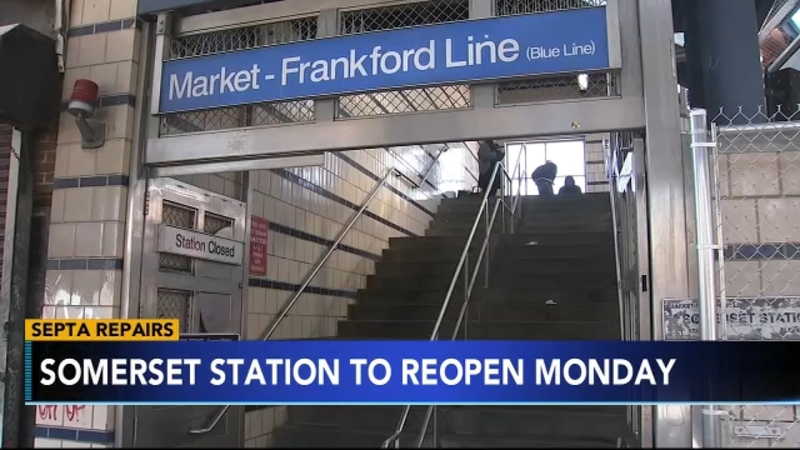 PHILADELPHIA (WPVI) -- SEPTA has set a reopening date for a stop on the Market-Frankford line that was shut down last month due to multiple safety issues.

In an update released Thursday, officials with the transit agency said the Somerset Station will be back in service on Monday, April 5.

It's located at the intersection of Kensington Avenue, East Somerset Street, and D Street in the Kensington section of Philadelphia.

SEPTA said emergency maintenance and repair work was needed throughout the station to "mitigate damage from urination, human waste, discarded needles and other debris."

"Efforts have focused on reinforcing key structures, including those supporting stairs and passenger crossovers, along with installing enhanced lighting, new signage, painting and deep cleaning. Work to restore elevators is ongoing and will likely continue beyond Monday's reopening," SEPTA said.

There will be transit police officers assigned to the station throughout the service day, SEPTA said, along with a new street-level police booth.

"The police officers will work closely with social outreach specialists who will be assigned to Somerset Station to connect those in need with substance use or behavioral health treatment and other services," SEPTA announced.

The changes made to the Somerset Station will be replicated at other stations that face similar challenges. SEPTA said it has already dispatched inspectors to the Allegheny Station to assess repair and maintenance issues.

By next week, 60 security guards will be added on the Market-Frankford Line, SEPTA said.

Back when the temporary closure was announced, SEPTA said drug use around this stop has gotten worse in the new year. Eight people have fallen on the tracks since January, compared to 13 all of last year. In 2019, before ridership was slashed because of the pandemic, there were 10 falls.

Philadelphia police say they had responded to 36 calls in the last 30 days before the closure for drug sales and people in need of medical assistance.