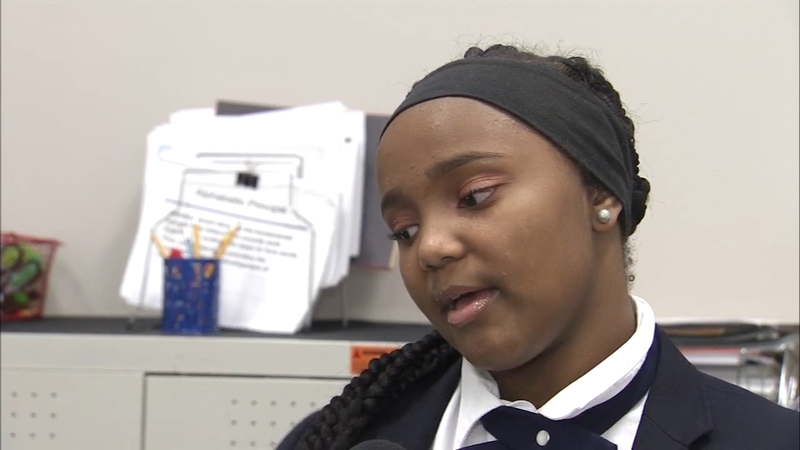 PHILADELPHIA (WPVI) -- It's a widespread issue that pops up almost every afternoon around 3 p.m.

SEPTA police say it's hard to be everywhere at once, but parents and Philadelphia school administrators are asking for more manpower in stopping after-school brawls on the subways.

On Monday, four seventh-grade girls on their way home were met by a group looking to fight.

"When I tried to grab my bookbag and go, someone dragged me. They picked my head up and slammed my head into the railing," said one of those 7th graders, Maja Quinones.

"A boy comes behind me and pulls on my bookbag and starts hitting on me and my friend Tatiana," said Jyasia Brunson.

It's an ongoing problem, says Veronica Joyner, the founder of Mathematics, Civics and Sciences Charter School.

"This goes on every day," Joyner said.

"The problem is this is an everyday event somewhere in the city," he said.

"SEPTA is not handling it properly. I am pleading with SEPTA to do something," said Joyner.

SEPTA says transit officers can't be on every train at all times.

While transit officers are deployed during after-school hours, the girls involved in Monday's beating say they couldn't find help.

"The alarm was pulled but it wasn't until like 20 minutes later that people actually showed up," said Quinones.

SEPTA police are asking for all passengers, especially kids, to use their phones and report issues right away.

"Download SEPTA Transit Watch instead of recording the fight, text us. And the other part is, if you're involved in the fight you'll be banned from SEPTA," Nestel said.

Detectives are using surveillance video and trips to various schools to identify the attackers.