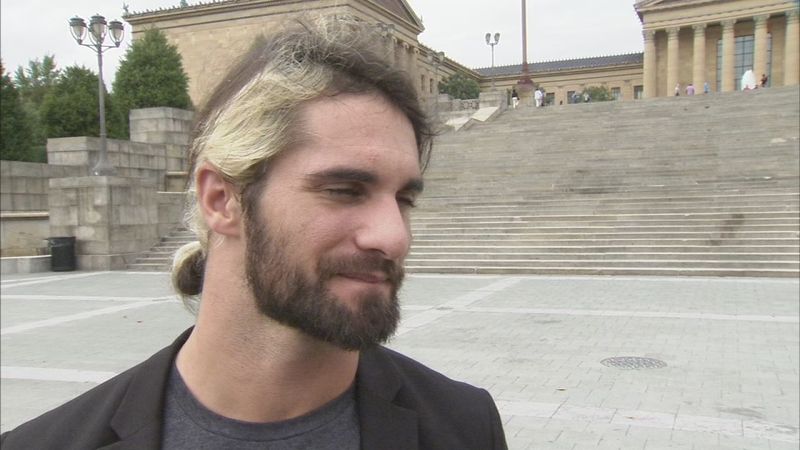 PHILADELPHIA (WPVI) -- He is known as Mr. Money In The Bank, but Seth Rollins could soon be known as WWE Champion.

Having won the prized briefcase in July, Rollins has a whole year to trade it in for a title shot.

And yes, he carries it around with him everywhere he goes, including the Rocky steps at the Philadelphia Museum of Art.

"Here I am, in front of the very famous steps of the museum and I got it with me. I think Rocky himself might be proud," Rollins said.

The briefcase itself is a WWE Superstar in its own right, showing the marks and scratches of being part of the show.

"It's got some character. A couple of dents," Rollins said.

Rollins, once known as the 'Architect of The Shield,' had no trouble responding to a pun and taking in the architecture of the Art Museum.

"It's quite beautiful actually. This part of the city is gorgeous. You've got statues, museums, and all the good stuff. It's nothing like I did with The Shield. Taking two clay balls, Roman Reigns and Dean Amrbose, and molding them into the men they are today," Rollins said.

Rollins was indeed part of a dominant stable known as The Shield. For close to two years, The Shield ran through challenger after challenger, until Rollins turned on his brothers to align himself with Triple H, Stephanie McMahon, and the evil Authority.

He says there is major competition between the former Shield members to be the best out of the group.

Rollins does have a point.

Not only did he win the coveted Money in the Bank briefcase, but he, Ambrose, and Reigns have been main eventing show after show for WWE ever since the break-up. (The Shield main evented plenty of shows while they were still together, too.)

But Rollins says he is ready to be the top guy on the roster.

"There's a fair amount of pressure that comes with being in my position, but it's something I welcome, something I'm real proud of. It's a responsibility that I do not take lightly, and I'm not only looking forward to maximizing that pressure, but turning in some of the greatest performances of my life, but also in the history of WWE," Rollins said.

In fact, Rollins will be in the main event of the next pay per view event. It is titled Hell in a Cell and his match will feature a giant steel cage surrounding the ring.

Intimidating? Not for Rollins.

"Hell in a Cell is a match I've been waiting for a very long time to be a part of and I'm excited to get in there with either Dean Ambrose or John Cena, whoever can surive their match earlier that evening," Rollins said.

That's right. Ambrose, his former ally, and John Cena, the Hulk Hogan of the modern WWE era, will wrestle each other to determine who will meet Rollins in the cell.

That's what happens when you are a top guy on the card, everyone wants a piece of you.

Rollins says, though, he can defeat both of them at the same time.

"With one hand tied behind my back, blindfolded, with a flu, twice on Sundays," Rollins said.

"All the fans of Philadelphia need to know is that I will be there, live and in concert, in action, doing my thing. I'm sure, it's WWE, it's a big anniversary, there will be some surprises, some secrets. All in all, it will be an amazing time," Rollins said.

Rollins, no stranger to Philly as he wrestled here many times before arriving in WWE, is ready for the Philly crowd.

"The Philadelphia fans have always been kind to me my entire career and I expect I will get a rousing welcome to my second home in Philadelphia," Rollins said.

But will he cash in that Money in the Bank briefcase tonight for his Philly fans?

"You never know. WWE is unpredictable as it gets," Rollins said.

The only problem, WWE Champion Brock Lesnar is not scheduled to appear.

But as Rollins said, you never know, and I'll take that to the bank.