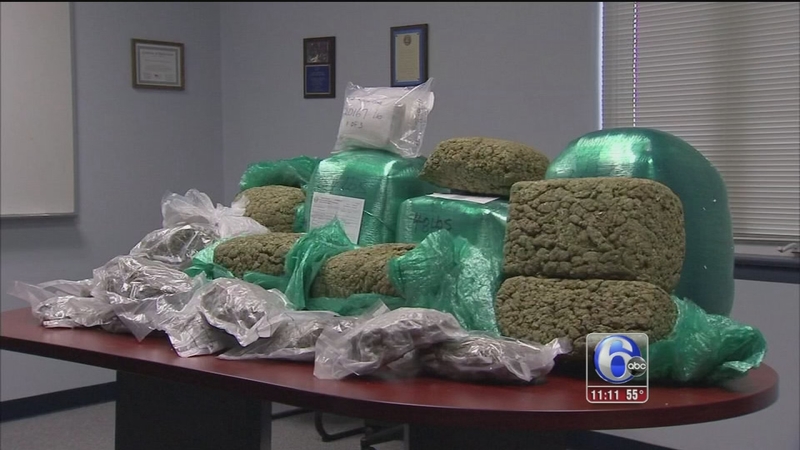 SHARON HILL, Pa. (WPVI) -- One man has been charged and two or more suspects are being sought after two robberies, and a drug haul of more than a million dollars was delivered to a freight company in Delaware County.

In surveillance video, an armed suspect can be seen storming the freight company last Wednesday morning.

The suspect orders two employees to the ground before letting his partner inside. They then take off in a vehicle.

Darby police tell us the armed robber only got away with one of two boxes shipped from the same address in California to Sharon Hill.

Police say the second one left behind contained much of high-grade marijuana and cocaine.

"There was two kilos of cocaine. There was approximately a block of about 50 pounds of marijuana," said Darby Police Chief Regina Price.

After police responded and found the second box, they then began checking surveillance video.

They soon would learn another robbery occurred outside of the freight company about an hour earlier. It was never reported.
A man picked up a shipment, walked outside and was soon robbed by at least two men inside a minivan. What was in the box is unclear, but they'd like to speak to the robbery victim.

"We are pretty sure its ground movement, and not through the air," said Price.

After the robbery inside the freight company, four more boxes arrived, again shipped from California. With the help of a K9, police determined the boxes contained drugs.

Police say a man identified as Donald Coote attempted to pick up two of the four boxes. Coote was arrested, and charged with drug offenses.

"He is not cooperating at this time," said Price.