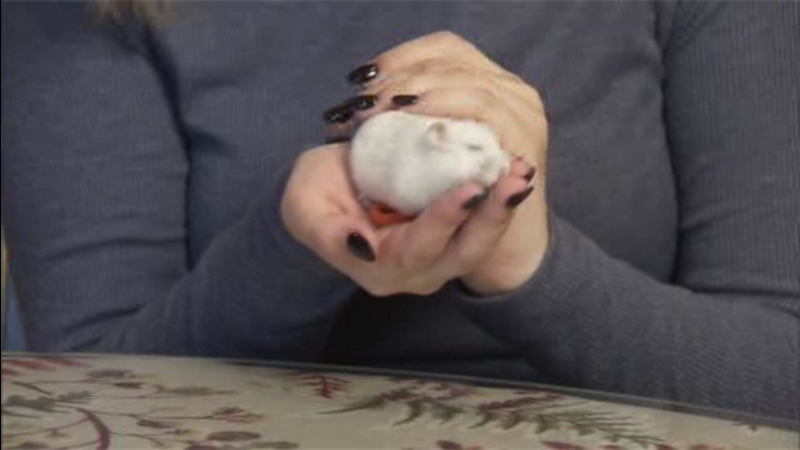 In this week's Shelter Me success story, a special needs hamster finds her best friend.

For 17-year-old, Hannah Hatzel, it was love at first sight when she adopted Moonstone on Valentine's Day of this year.

"I saw that she only had one eye, and she was kind of young and timid, and I wanted to bring her home," said Hannah.

Her single eye makes her a special needs hamster, but Hannah says that doesn't slow her down.

"She's really active at night. She will not sleep a wink, but she's loving, and she loves to just be held," said Hannah.

Hannah added, "I struggle with depression. I have someone to care about, and love and hold onto."

Loving Spirit Hamster Rescue was founded 3-years-ago by Essie Jaime, and it's dedicated to saving the lives of the furry small creatures.

Essie Jaime is the Owner/Director of Loving Spirit Hamster Rescue.

She said, "A lot of people get them for their children as pets. They realize that they need more care than they thought, so often they're dumped at shelters."

Flower is another special needs hamster. She has a tumor on her back, but Essie says she's still a normal hammy.

"She would be good for really anyone that just loves hamsters," said Essie.

And, there is also Star. "And she also has a mass on her back. It doesn't stop either of them from running in their wheels. They're very active," said Essie.

And this is Cher. Cher is a long haired Syrian hamster. Cher came to the rescue with her brother, Sonny, who was just adopted last week. Now Cher is waiting for her forever family.

If you're interested in Cher or any of the hamsters seen today, you can visit the Loving Spirit Hamster Rescue website.