'Sometimes she would borrow shoes from a neighbor': How an expandable shoe is changing lives 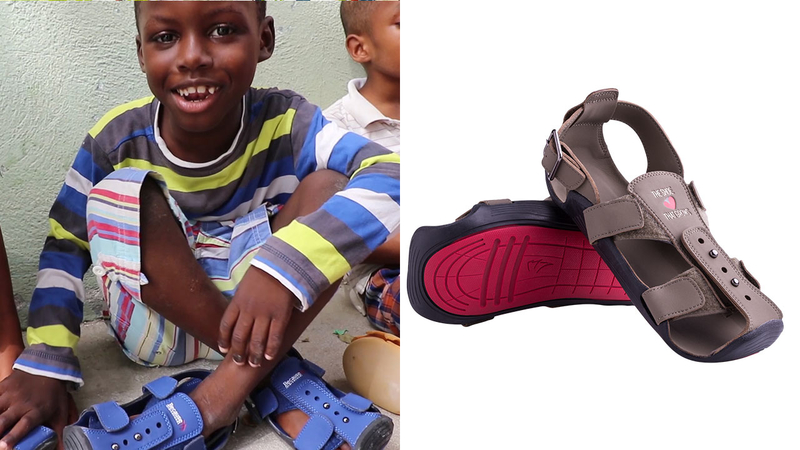 How an expandable shoe is changing lives

Kenton Lee was walking with a group of children in Kenya in 2007 when he noticed a little girl wearing shoes that were too small for her feet. That's how he got the idea for a shoe that can adjust to children's feet as they quickly grow.

He started work on a prototype. What he came up with, The Shoe That Grows, is a shoe that adjusts in three places, allowing it to expand by five sizes. They last for years.


A shoe can give a child a chance to grow and succeed, Lee told ABC.

"My favorite story is about a young man from Uganda named Patrick," he wrote in an email. "He had never had a pair of shoes before."

Lee wrote that Patrick was so excited to get his shoes that he worked the entirety of the next day to earn a few coins. He then found a phone to call the friend who had given him the shoes so he could say thank you.

"Wow," Lee wrote. "I still get goosebumps when I think about that story, how much a pair of shoes meant to Patrick, and how he would work so hard to say 'Thank you.'"

Patrick is far from alone. As of the beginning of the year, 128,595 pairs of The Shoe That Grows have been distributed. 2017 was their biggest year yet. Lee said they have reached more than 90 countries.

The shoes are distributed by churches, nonprofits and other groups that partner with Because International, the nonprofit behind The Shoe That Grows. The partner groups raise money to help cover the costs of the shoes, then bring the shoes with them when they do philanthropy work.

In some cases, the shoes are created locally.

"We not only get shoes to kids - we also bring jobs to developing areas through the production of our shoes," Lee wrote to ABC. "Shoes to kids AND jobs to families. We want to squeeze all of the impact out of this idea that we can!"

Lee told one more story that demonstrates what a big difference a pair of shoes can make. A volunteer from Alaska, Peter, was giving shoes to a 6-year-old girl from Nicaragua. She started crying and talking with Peter through a translator.