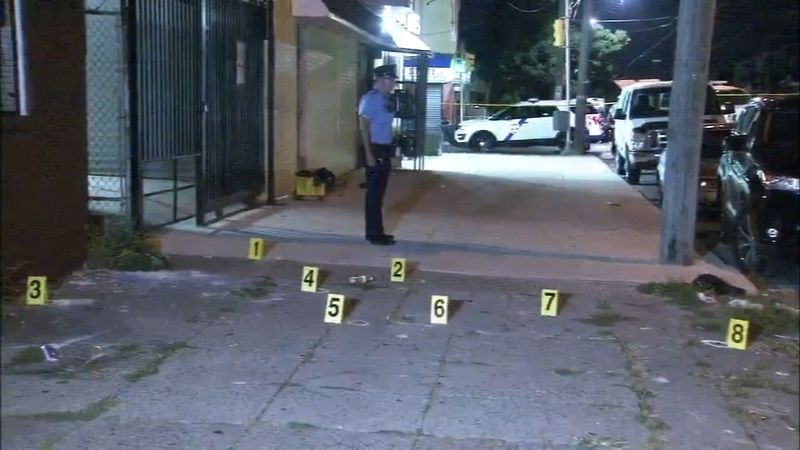 Search continues for gunman who shot at police

PHILADELPHIA (WPVI) -- A manhunt is on for a suspect who allegedly opened fire on a plainclothes Philadelphia police officer on Tuesday night.

A swarm of police officers descended on the 2000 block of South Salford Street in Southwest Philadelphia.

Police tell Action News the gunman, who was wearing a hooded sweatshirt over his face, fired at least 10 shots at the officer.

A swarm of police officers are on the scene as reported by Christie Ileto during Action News at 11 on September 3, 2019.

Officials say a plainclothes officer in an unmarked car was conducting surveillance in the area when the gunman walked up and opened fire. He shot at the driver's side of the car. The officer was not injured.

A gunman wearing a hooded sweatshirt pulled tightly around his face opened fire on a plain clothed officer sitting in this unmarked SUV.
It happened on Kingsessing near 60th. At least 8 shots fired, 2 of them hit the officer’s SUV, both on the driver side @6abc pic.twitter.com/5oy5iDnYV9

#UPDATE per @PhillyPolice 8 shell casings were found on scene. The 12th district officer was in plain clothes, unmarked car doing surveillance in the area when the gunman walked up and opened fire. He shot at the driver side door and rear driver side door. Officer is uninjured pic.twitter.com/jVL1B60LA0

"He was sitting in the driver seat, so he's very very lucky that he was not struck by gunfire," said Philadelphia Chief Inspector Scott Small.

Detectives spent hours combing the neighborhood block looking for the gunman, but their search proved fruitless.

"This individual slipped away. We don't know how he got away because we set up a perimeter pretty quickly," Small said.

The suspect is described as a 6-foot black male, wearing a gray hoodie and blue jeans.